Last Saturday (23 June) I got out on my bicycle which I haven't used for a long time, and cycled to Bexhill along the recently extended cycle path, to take part in a chess match. It was a rapidplay (30 minutes each) which I'm not really keen on but am trying to get used to. I was playing for the Hastings club against the Bexhill club. In my first game we reached a position where I forced exchange of queens and followed up with a knight fork of king and rook to win back the exchange and equalise forces. So I offered a draw and this was accepted. The second game against the same opponent however I lost fairly comprehensively. As a whole the team lost 4-6. I must find more excuses to get out on my bike, as I'm not getting much other exercise than walking lately. The problem is I like to have a definite destination to head for, and reason for travelling.
Posted by George Jelliss at 23:53 No comments:

On a Circular Tour of Kent 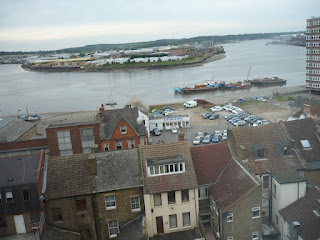 On Friday morning I set off for a week-end of chess and travel. Initially I asked for a period return at Hastings station on the 8.36 to Ashford, but they would only sell me a single, which was just as well since I would have had to return the same way instead of taking the circular route. Although the train was 7 minutes late and there were only 12 miniutes allowed for the change at Ashford this didn't prove a problem as the train to Maidstone East was on the same platform. From Maidstone I took the 101 bus to Chatham Waterfront, spent some time walking around and having a meal before signing in at the St George Hotel. The room had a pleasant view over the river.

After a rest I went down to the High Street to catch a 145 bus to the chess venue, Warren Wood Social Club, paid my fee and played the first game, which was against a junior, and managed to win though he was graded higher than me. I always try to play the board and take as little notice of my opponent as possible, though when he has a habit of slipping down and peering up at you it's a bit distracting.

I misread the start of the afternoon's play which was 3:30 and not 2:45 as I thought so I didn't manage to get away into the town. Instead I walked around trying to find a shop to boost my provisions, but could only find one. The access to the venue by bus was difficult since there were less buses running on the Saturday and Sunday, and also not going as far.

On the Saturday I lost both games, the first one a hard-fought game against a strong opponent, but the evening one against a weaker player I was just too sleepy. Maybe didn't sleep too well due to noise at the hotel because of the England football match being shown on the TV in the lounge.

On the Sunday I won the first game in what I thought was good style with a kingside attack, though my opponent was obviously upset, and at first refused to hand in her score sheet, though she calmed down later and agreed to run through the game. I lost the final game, though it came down to a king + knight + pawns endgame, but he had too many pawns.

On the Monday I decided to return by taking the train to Dover Priory. Once there I walked up to the Castle and saw the sights, but didn't manage to get a tour of the WWII tunnels due to there being lots of tourists, including two classes of students from France.

Finally returned by another 101 bus to Folkestone, where I had a walk through the Lower Leas park, below the cliffs, before catching the 101 again, which took me as far as Lydd, and from there on the 100 bus back to Hastings.

Posted by George Jelliss at 15:32 No comments: