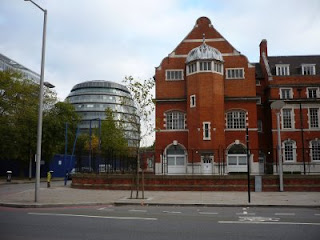 I made a slight error in the description of the last photo; the building just visible on the left is not the Mayor of London's office but some other building. The new City Hall is better shown in this other photo. For a photo from a different angle see this one on my Flickr pages. That's not taken with a distorting lens, the building really is that lopsided shape!

The part of the St Olaves building with the small cupola was, if I remember right, used as the gymnasium. There were stairs leading up to a balcony where we changed our clothes. I was never any good at gymnastics, but enjoyed climbing the ropes, once I'd got the hang of it.

By the way there is no missing apostrophe in "Olaves", it is an old form of "Olaf's" so I suppose the e serves like an apostrophe. I would guess it was originally pronounced Olav-ez rather than to rhyme with slaves! The school was solely for boys but there was a companion school, St Saviour's, for girls, though there was never any contact between the two as far as I was aware.
Posted by George Jelliss at 20:22 1 comment: 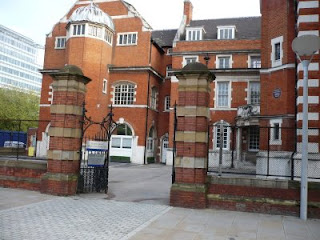 The photo, taken last year, is of the building that housed the school I went to from 1951 onwards. The building just visible to the left is the Mayor of London's new offices. When I was there that part was occupied by warehouses and cranes and other river-side industry. The whole area has now been redeveloped and is open to the public. There is a large green space called Potters Fields, next to Tower Bridge.

On Saturday evening, feeling tired, I thought for a change I'd have a cup of Horlicks before going to bed. It is supposed to help you sleep well, though I don't usually need any help, since I sleep like a log as they say. However, instead of sleeping well I had a nightmarish dream. It was one of a type I've often had over the years, in which I get lost in a labyrinthine transport system.

Probably some of this goes back to when I passed the 11-plus and was sent to St Olaves Grammar School which at that time was near Tower Bridge in London. This meant commuting every day, catching a bus to Plumstead station, a train to London Bridge ststion, and walking down Tooley Street. How I managed to put up with all that travelling for several years I now wonder.

I also remember we used to travel by train down to Dulwich to play cricket and rugby, since there were no playing fields nearby. This, if I recall correctly involved a change of trains at Denmark Hill, but my recollection is now hazy, but I remember that station for some reason. Later I worked in West London and travelled more on the underground system.

That may account for all the tunnels I get lost in in my dream. There was a curious prelude to the dream in which I was following a crowd of other people down the tunnels and we came to a moving wall which we had to hold onto by our fingernails! Some were falling off into oblivion. At the end when I reached the ticket barrier all I seemed to be holding instead of a ticket was something like a brown postage stamp. The ticket collector however was distracted and I ended up coming out some other way. The police were directing people in the opposite direction but didn't seem to notice me. I could go on, but am not sure I recollect anything clearly.

Some of this may have been stimulated by my recent trip to Lincoln for the Circular Chess. That was a bit complicated, the out journey being via Charing Cross, Kings Cross and Newark. On my way back I missed my connection to Peterborough, due to sitting too long on the wrong platform at Lincoln. No more Horlicks for me for a while!
Posted by George Jelliss at 18:07 No comments:

On Saturday morning about 11am I decided to go along to a meeting of the local, St Leonards area, Labour councillors. Those present were Trevor Webb, Jeremy Birch and one other (Andrew Cartwright ?). It was held in the basement of the Seaspray Hotel in Eversfield Place on the sea-front between Warrior Square and the Pier. I got there just as someone else was leaving and had time for a lengthy chat. I'd met councillor Webb before at the SACRE and HIFF meetings in connection with my Hastings Humanists activities.

I asked about plans for re-opening the Pier, suggesting that it might be possible to open just the front apron while the rest of the structure was being repaired. At present it is owned by a company registered in Panama.

We also discussed the imbalance of Labour representatives on the local Cabinet, which hardly seems to be a democratic arrangement, but is apparently within the rules. I was interested to find that it was the previously Labour-controlled council that enforced the landlords along Eversfield Place to have work done to improve their properties, which at the time I lived there (1994-9) was very run down. There has certainly been a great improvement since then.

Lastly I raised the problem with the seagulls breaking open waste bags and spreading litter about, suggesting that those households who experience this problem, and don't have suitable space for wheelie bins, should be supplied with stronger sacks in place of plastic bags. Apparently such sacks are available.
Posted by George Jelliss at 09:02 No comments:

On Friday 10th I woke up early and decided to go for an early morning swim at the baths, about 7:30 to 8:30. I'd not been there that early before, and there were already quite a few people using the pool. I'll have to try to get into the routine, as I've missed out on going there regularly since they introduced free swimming for people over sixty.

The reason I hadn't been swimming in part was due to some bureaucratic problems over getting my card updated for this purpose, since I have neither a driving licence nor a passport, and without them apparently you don't exist. In lieu of these they wanted to see my birth certificate, which like me is now somewhat of an antique, and a utility bill. Once I'd got these all sorted out and took them to the desk however it turned out that they didn't need to see them after all!

I suppose this was a change of policy. Perhaps it followed my letter to the Hastings Observer a month or so ago in which I commented on the policy. However the editor seemed to think, from the headline given to my letter, that I was advocating free swimming for all, because I thought it might seem unfair to younger people particularly if they were out of work.

So far, since moving back to this area, I haven't been for a dip in the sea. I must get round to that before the summer weather ends.
Posted by George Jelliss at 15:33 No comments:

On Saturday evening I went to Concordia Hall, which is in Church Road high up the hill above Warrior Square station, to see a play based on The Ragged Trousered Philanthropists by Robert Tressell. I'm not sure who owns the Concordia Hall, but it is quite large and has a garden alongside. Tables on either side of the seating offered mainly socialist tracts.

I vaguely remember reading the novel many years ago, but evidently didn't appreciate the humour then, unless that was emphasised in this production. There were obvious updates to reflect the current news stories about corruption over expenses. Being near the back of the hall, and the actors not being raised up much, I couldn't see much of the action, but since the characters they were playing were distinguished mainly by the headgear they wore, this was not such a problem.

The story is about a group of workmen employed to decorate the home of a wealthy councillor, and is based on Robert Tressell's experiences in Hastings, which becomes "Mugsborough", in the early 20th century. The local paper is referred to as "The Obscurer", which in view of my own difficulties in obtaining coverage for the Hastings Humanists, seems very appropriate (and reminded me of the Leicester Mercury being known as "The Mockery"; perhaps every town has a disparaging name for its local paper). The performance ended with a rendition of the socialist anthem, "The Red Flag".

There were other events earlier in the day, and more on the Sunday, but I was unable to find the time for these, though a lecture from a member of the William Morris society looked interesting.
Posted by George Jelliss at 19:02 No comments:

A Quiz Night and Hastings Pier

Last night I went to a Quiz Night held at the White Rock Hotel by a group calling themselves the "Hastings Pier and White Rock Trust". I took part in it as a one-man team and came last with 28 out of something like 92 points, although many of the questions were about television programmes and adverts, which I've not watched. There was a prize, for coming last, of six small bottles of alcoholic beverages. However, since I'm not much of a drinker I passed it on to the next to last team. The first prize winners got six large bottles. There was no mention of any campaign to reopen the pier. It seems the quiz was mainly a way of promoting the hotel bar. So I doubt I'll be joining the organisation. But I hope Hastings Council can do something soon to get the pier open again and in working order. There was an article in The Guardian (G2 22 June) that suggested piers are making a comeback in places such as South End, Saltburn and Deal. So why not Hastings?
Posted by George Jelliss at 18:06 No comments: