In W. W. Rouse Ball's Mathematical Recreations and Essays (11th edition 1939, and probably earlier editions) states (p.181): "Warnsdorff [sic] added that when, by the rule, two or more cells are open to the knight, it may be moved to either or any of them indifferently. This is not so, and with great ingenuity two or three cases of failure have been constructed, but it would require exceptionally bad luck to happen accidentally on such a route." However he gives no reference to where work showing this was done, and diagrams no example of it. The diagrams shown here are the first cases I have encountered where the rule fails. 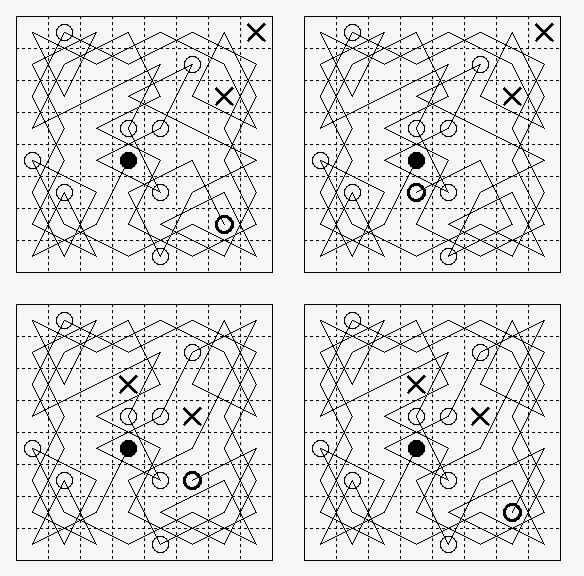 The choices of route available from f7 onwards all lead to a dead end, shown by the darker circle, that leaves two cells, marked by crosses, unvisited.

Posted by George Jelliss at 08:44 No comments:

Continuing my enumeration I have found two more closed tours that follow the Warnsdorf rule and have only seven places where the rule allows two or more choices. These points of ambiguity are shown by the white circles.

The tours start at the black dot and end at the darker outlined circle (this is not a point of ambiguity). Perhaps the tours should properly be termed "re-entrant" since the move joining the end point to the first point is extra to the construction. Any link to the black dot in the course of the construction is prohibited since it would result in a closed circuit covering only part of the board. Alternative routes at the last ambiguity lead to open tours.

Posted by George Jelliss at 20:07 No comments:

Here are two more closed tours formed according to the Warnsdorf rule, with minimum of seven cells where there is an alternative route. In these tours there is no choice on the first move given the initial placement of the knight at d1. 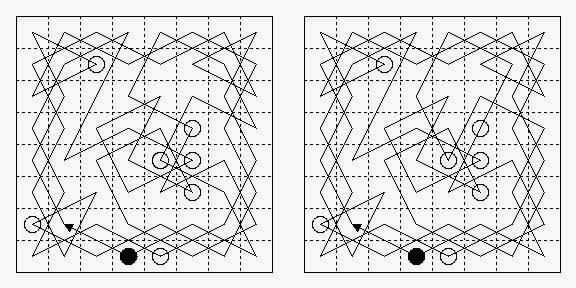 These tours are not as symmetric as the previous example and differ from each other only in the choice of routes from f5. Other choices at e4 lead to open tours. This is part of work in progress. I've not yet enumerated all the solutions with 6 ambiguities, but have reached 540 incomplete paths with 5 ambiguous points.
Posted by George Jelliss at 13:39 No comments: