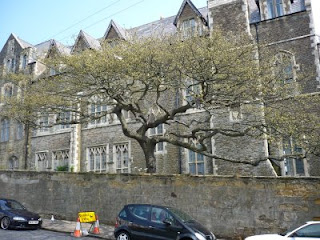 Another photo of the tree opposite my front door shows the green shoots of spring appearing at last. There are also road works going on, but these seem to be all year round.

Some of the seagulls are acting crazy, shouting and dancing in the road, but I've not been able to get a photo of them so far. From my windows I also see a lot of pigeons of variegated colours. I put a query about this on the Dawkins Forum. Apparently this is because they are feral pigeons, descended from domesticated pigeons, whose colours have been selected by pigeon breeders.

Monday night I went to the Hastings Writers' Group. It was submission day for a Mystery story of not more than 2000 words. We read extracts from what we had written, up to a cliff-hanging point where others could start to guess what the solution to the mystery would be. My own story was about the missing portraits of Robert Hooke, the 17th century scientist.
Posted by George Jelliss at 09:20