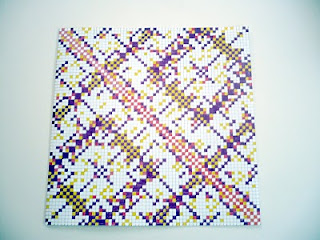 Over the bank holiday weekend I spent some time drawing and colouring the pattern shown here. It is a "Chessboard Mosaic" of the type I described in The Games and Puzzles Journal (Vol.1 No.4, March-April 1988, p.64) but on a larger scale. Varied patterns of this type can be formed by first numbering the cells of a chessboard 1 to 64 in some fashion. This example is derived from the numbering of the first Magic Knight's Tour, discovered by William Beverley in 1848. It is a 64 by 64 matrix; when numbered 1 to 64 along the top and left edges, a mark in the square where the r row meets the s column indicates that a piece can move from cell r to cell s. In this example the dark cells indicate rook moves, the yellow cells bishop moves and the red cells knight moves. The pattern is symmetric about the principal diagonal since these moves are all reversible. The rook move pattern is symmetric about the secondary diagonal, but the knight and bishop patterns deviate slightly from this symmetry, due to the nature of the Beverley numbering. The red railway-line pattern down the main diagonal is the result of using a knight's tour numbering, since r is always connected to r+1 by a knight move. The apparent figure "8"s on the main diagonal derive from several zigzag pattern of knight moves in the tour wheren the first and third and second and fourth cells are in the same rank or file and thus connected by a rook move. I'm wondering whether I should exhibit this at the Art Forum; apparently any member can exhibit one item free; but is it really Art?

Edit: I've replaced the original image by an enhanced version, since it came out too gray. The background I used was in fact a sheet of white card.
Posted by George Jelliss at 12:18