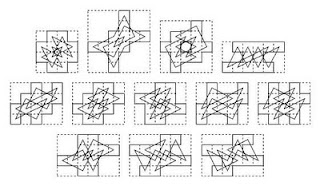 As noted before I'm in process of tidying up my notes on knight's tours. One of the sections I've not previously published, as far as I recall, concerns the enumeration of all the smallest knight-tourable boards, at least up to 12 cells. The illustration shows all the centrosymmetric tours on boards of 12 cells.

The first two of these diagrams are not merely centrosymmetric, in the sense of being unchanged by a 180 degree rotation, but are also axially symmetric about the two diagonal axes. The first of these was published by the famous mathematician Leonhard Euler in what waa probably the first scientific paper on knight's tours, presented in 1759. The second is one of my own favourite discoveries, it is the 12-cell tour whose containing rectangle is the largest possible, the 6 by 6 square.
Posted by George Jelliss at 21:02