The Eyes in the Sky! 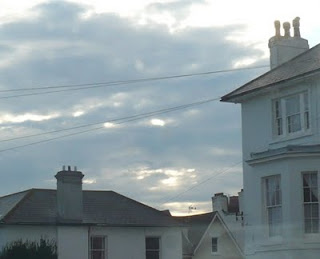 I've been intending to post this photo since the day after I posted the last message. I was half-dozing in my chair in the afternoon and suddenly woke up to see what appeared to be two demonic eyes glaring at me through the narrow window opposite. By the time I had realised what it was and got my camera ready the cloud formation, with the sun behind it, had moved on slightly, but the two "eyes" are still visible, but not so dramatic as they looked a minute or so before. Also the view shown is much wider than the one I saw framed by the window. One can appreciate from such an experience how people can attribute such phenomena to the actions of supernatural beings, and perhaps interpret them as personal warnings, since they depend on the location of the viewer and would not be seen much more widely.