I spent most of 25 December, Newton Day, appropriately doing some mathematics.

I've put together all my pages of notes on knight's tours to see if I can fit them into a reasonably sized book of around 250 pages. At present it is at around 350 pages, but further selection and editing should get it down to the right size. The pages are formatted to standard A4 size with inch margins, which allows four chessboard diagrams across the page.

The main problem I've had with the whole idea is to get the right balance between History and Theory. I now start with a chapter headed Chessics which introduces the theory, follow this with a chapter on lateral and diagonal movers, i.e. wazir and king tours, and then get to the knight, with more theory and tours by longer leapers and other pieces coming after. I'm not sure I like splitting the Theory section like this, but I do feel I'm making progress.

I had some items on knight's tours back in the first issue of Chessics published in 1976, which is now 33 years ago. I'm rather a slow worker.
Posted by George Jelliss at 12:46 No comments: 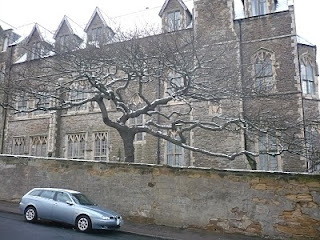 This is a photo that echoes the first one that I posted here, on 2 February 2009, of the famous tree opposite my home, with snow on the boughs.

The people in Flat 2, on the ground floor next to mine, moved out a couple of days ago. They hadn't been there for more than six months it seems to me. Why they chose to move I've not found out. A better home for their cats and dog perhaps.

The bin-men seem to have adopted a new method of collecting the rubbish. Instead of wheeling our bins to the dust-cart and emptying them they now seem to take the bags out of our bins and put them in their bin and then empty their bin into the cart. This means that they leave behind any loose unbagged items in the bins. It will probably be up to me to put them in bags to ensure they are collected.

They have left one black bag however that appears to contain human excrement. Not that I've yet looked too closely at it. Why anyone should have put this in the bins I don't understand, nor who has put it out. I suppose it will be up to me to clear this away as well, but I'm not sure how to deal with it; empty it down a drain perhaps? More important to find out who did it and stop it happening again.

All this, and other occurrences, has left me feeling distinctly down this week.
Posted by George Jelliss at 23:19 No comments:

Back in October I obtained a CD from Zillions of Games which I installed on my computer. It enables one to play many different board games.

I've only just got round to making use of it to get back into the swing of playing chess. I was intending to join the Hastings Chess Club, but don't feel that my playing is up to the necessary level. Not that I've ever been much good.

It is possible to download many other games from Zillions. Circular Chess is a variant I particularly like, having played it at the annual championship in Lincoln. Zillions has three realisations of Circular Chess that I have downloaded, and so far have tried one of these. I lost against the computer, but at least the game went to 40 moves.
Posted by George Jelliss at 10:47 No comments:

On Wednesday. finding I had an accumulation of empty glass jars to dispose of at the recycling point, which is in the car park of the leisure centre, I decided to combine this duty with a swim in the pool.

Despite resolving to go swimming regularly, and it now being free for pensioners like me, I'd not been there for several months. Apart from the bad weather, and sheer laziness, this is because the times one can go swimming and get a clear lane are limited. The only trouble with swimming in the afternoon is that it disturbs the digestion. If I'm going to swim regularly at that time I need to organise my meals to suit.

On Thursday evening I ran a quiz for the Hastings Humanists. Most of the questions were based on a similar quiz I held a few years ago in Leicester. Although I thought many of the questions were quite easy the scoring achieved was only around 1 in 4 or 1 in 5 correct on both occasions. But then it's easy being the quizmaster since you have all the answers written down. Next year, as a member suggested, we could ask people to bring their own questions, and everyone could have a go in turn at being the quizmaster.
Posted by George Jelliss at 23:39 No comments:

Tuning in to TV again

When I moved back to Hastings in December last year (2008) I brought a portable television with me which, in Leicester, received all the channels on an indoor aerial, but when I tried it out here I could get no reception at all. I put this down to the hills and high buildings all around. However, after tidying up and moving things around last week, I tried again today plugging the TV into the outdoor aerial and this time I got Channel 5 (though on Channel 7). All the other channels were still blank.

After consulting the handbook about how to tune in the TV, and some considerable pressing of buttons, now find I can access all the five main channels, though BBC 1 and 2 were the most difficult to locate. Now I shall have to look at the programme schedules to see if there is anything worth watching.
Posted by George Jelliss at 19:32 No comments:

Email ThisBlogThis!Share to TwitterShare to FacebookShare to Pinterest
Labels: TV

I've completed an article "On Mixed Quaternary Symmetry in Knight's Tours" which John Beasley has accepted for the next issue of Variant Chess. It follows up the work by Ernest Bergholt written in the form of memoranda sent to H. J. R. Murray in 1918 but not published until 2001 in The Games and Puzzles Journal #18.

Where my treatment differs from that of Bergholt and Murray is in separating out the moves, such as the eight corner moves, that show octonary symmetry. Such moves can be regarded as part of either the direct or oblique sets of moves, but it is not always clear to which of these sets they should be assigned.
Posted by George Jelliss at 19:48 No comments: 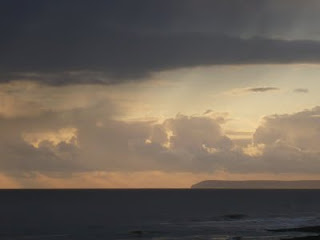 We have had beautiful cloud-scapes over the sea today. I went out in the morning to deliver some notices about the next Hastings Humanists meeting, and walked as far as the Bo-Peep Pub, but unfortunately forgot to take my camera. There were also some seagulls abligingly posed on the promenade railings, but no doubt they will be there to be photographed some other time. In the afternoon I remembered to take the camera. The chosen photo showing the outline of Beachy Head is almost of painterly effect. Earlier in the day the same view was clear enough to show the light reflecting off the white buildings of Eastbourne, and the clouds were bright and all shades of grey.
Posted by George Jelliss at 17:47 No comments:

December is Here, or has it Gone? 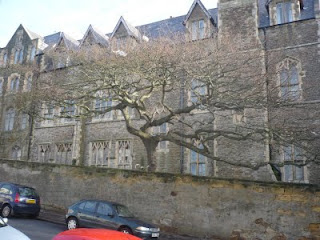 Our tree has now lost all its leaves, but still has a couple of plastic bags tangled in its twigs. This is now back to the way it was when I moved here in December last year.

An invitation has just come through the door "to view proposals for a new development at The College of the Holy Child Jesus" which is the building behind the tree. "Proposals include conversion of the historic buildings into residences, additional new residential development, a new open space facility and enhamced landscaping." The exhibition is open Friday 11th December (1 - 8 pm) and Saturday 12th December (10 am - 1 pm).

I suppose it is still December, and I haven't dropped off into a coma for a month? The date according to the read-out on my BT phone now says it is "Jan 2"!
Posted by George Jelliss at 18:42 No comments: