My Move to Crewe

I completed a move to Crewe on 4 January 2019, but it has taken until 21 January to reestablish my internet link, mostly due to my own incompetence with electronic devices probably. A mobile phone that I bought to assist my move, but struggled to operate, appears to have gone kaput.

The flat I  have rented is nicely placed for walking access to the pedestrianised town centre, and midway between big supermarkets, Asda and Morrisons, though it is a pity that M&S has moved out to a ghastly car park called Grand Junction, and there are many closed up shops like BHS.

I've joined the local public Library which is just beyond the end of the road, and is part of the "Lifestyle Centre" which includes a swimming pool. I've also begun visiting the Crewe Chess Club which meets nearby on Wednesday evenings.

I've obtained a new local bus pass, signed up to the electoral register, and registered with a GP at the Grosvenor Medical Centre which is a longish walk along West Street, or past Morrisons, and I've walked most of the nearby roads to get familiar with the district.

Generally I am rather happy with the move, and look on it as a new adventure, though probably the last in my regular moves every ten or eleven years, since I will be 79 next month. 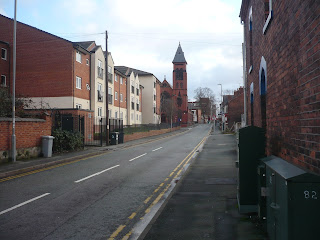 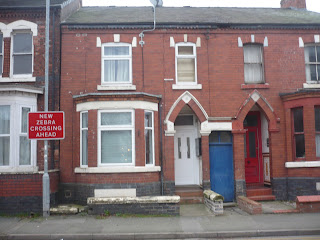 Flat 1 is behind the bay windows.