A Busy Week in London

On Thursday evening I returned from a two-day visit to London, but I haven't been able to report on it until now since my internet connection has been down, due to a fault at Virgin Media.

On the Wednesday afternoon I had booked a visit to the Cocoon at the Natural History Museum, and in the evening went to the 'Evict the Bishops' debate at the Houses of Parliament. These were both something of a disappointment. I've submitted an article to HumanistLife relating to the first topic, and have reported on the second on the Hastings Humanists blog. The cheap hotel room I stayed in overnight was also not to be recommended.

On Thursday afternoon however I had the much more pleasant experience of going to the Albert Hall to see the Cirque du Soleil production called "Varekai". Their show is a sort of mixture of circus, theatre and ballet. To appreciate it best I think you need to book a seat facing the stage and probably on the flat, though these seats are the more expensive for that reason. I was in a box high up on one side. From there you can see all the workings of the stage. They make extensive use of trap doors through which characters regularly appear and disappear. There are all the usual circus attractions, but no animals of course, though many of their costumes resemble strange creatures.

On Friday evening at the chess club I was inveigled into an all-play-all rapid chess tournament, and despite being allowed a handicap of 15 minutes against 5 minutes playing time against strong opponents managed to lose all my eight games, though they all went close to the wire.

So it was a busy week. More on it later perhaps.
Posted by George Jelliss at 00:10 No comments: 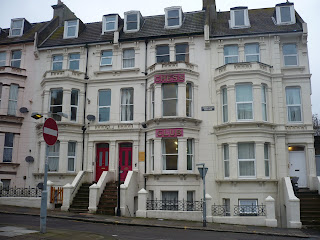 This is a photo I took on Monday of the Hastings Chess Club premises in Cornwallis Terrace. As you can see, like many places in Hastings, they hardly conform to the requirements of disabled access. The steps up to the front door could hardly be more precipitous!

Besides chess I've started to take an interest once more in music, with a view to playing or composing, probably with an electronic keyboard. Besides loking at various keyboards in a local music shop, and searching for details online, I borrowed a book "Play it Again" from the public library. This gave some useful website links and they are now listed on a page of my website devoted to Music.

Last week I also received a bowel cancer test kit through the post from the NHS. Taking smears for the test was not a very pleasant occupation, it must be very embarrassing for people who are unable to do them without assistance. According to the news this morning everyone who attends hospital is now to be tested for liability to thrombosis. Is this determination to keep more people living longer really a good thing? I see Martin Amis is advocating the provision of euthanasia booths on street corners where the decrepit are to be encouraged to end it all!
Posted by George Jelliss at 09:03 No comments:

I've continued with trying to get back into playing chess, with visits to the Hastings Chess Club on Tuesday afternoon and again on Friday evening. My results have not been great, especially one game against a really strong player who just walked all over me, metaphorically speaking. I'm still walking into pins and forks and batteries and leaving pieces en prise, but given time I am managing to defend reasonably soundly against players of club strength, and finding a few combinations. There's an interesting article by Gary Kasparov on "The Chess Master and The Computer", which was linked to on the new HumanistLife forum.

Earlier in the day I had an appointment with the bank to discuss putting some money into an ISA, and also took out some Contents Insurance. There was also the possibility of adding my pedal cycle to this, but I judged it too expensive to do this. If it were stolen it would be just as cheap to buy a new one.
Posted by George Jelliss at 23:46 No comments:

On Friday Evening I at last got round to joining the Hastings Chess Club. I went along at 6:30 and left at about 8:30 after playing three games. Not having played orthodox chess, and very little variant chess, for ten years or more I lacked confidence that I could do any good without getting in some practice. The first two games however I drew, and the other I resigned. I did practice with a couple of games on the computer against the Zillions of Games version of chess. However it's going to take me quite a while to get up the confidence to play in tournaments again, as I did many years ago.
Posted by George Jelliss at 20:49 No comments:

Email ThisBlogThis!Share to TwitterShare to FacebookShare to Pinterest
Labels: chess

I took advantage of the thaw on Monday afternoon to replenish some provisions. There were still some icy patches to watch out for, but the pavements along Norman Road were completely clear. Presumably the shopkeepers there had cleared the snow away.

This morning, Tuesday, the thaw was more complete, so I ventured out to Hastings town centre, but the pavements in Robertson Street and Wellington Place were still icy, though partially gritted. Oddly I found the pedestrian crossings in the town, for instance near Hastings station, were less safe to use than the road itself, since the ice doesn't seem to melt as fast on the special tiles that are used, in place of the old kerbs, to allow disabled access.

Later on I went to the area of Warrior Square station and Southwater, and there the snow was still uncleared and quite hazardous. I'd have thought clearance of the entrances and exits from stations would have had some priority.
Posted by George Jelliss at 21:55 No comments: 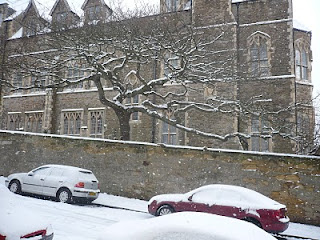 We had a bit more snow yesterday but no more today so far, although more is forecast. I ventured out on Friday when there was a light covering, but only went as far as the Best One shop on the front near Warrior Square to ensure I had enough bread for the weekend, and to pick up the local paper to see if my press release about the Hastings Humanists meeting was included, which it was. I don't usually buy papers at a supermarket, since I object to the way many newsagents have been forced out of business, but it is no longer so easy to distinguish between them, they are all now mini-supermarkets.

The TV reports and papers are full of reminiscences abnout past years when there was heavy snow or long cold spells. I have reason to remember 1947 because I broke my right arm when I fell in the snow, coming down the steep hill from Purrett Road school in Plumstead. I remember it as quite a pleasant time, playing with my meccano set and learning to write with my left hand. I'm still somewhat ambidextrous.

When I moved into the flat here last December there were just lace curtains at the high windows. There were curtain runners above the windows, but no runners to slide on them, and I found they were obsolete. Curtains of the requisite length seemed not to be available off the shelf, and having them made would have been very expensive. In any case I wasn't convinced that they would give sufficient privacy, or be easy to open and close without having to get up on a chair or ladder.

My solution was to make a set of blinds. I bought some lengths of 1 by 1/2 inch wood from Winchester's at Ore to make the frames, and some good quality coloured sheets from the warehouse shop in Cambridge Road, and fixed them together using an upholsterer's staple gun. They are only flimsy, but have stood up well. I've just had to replace a few of the staples that were coming loose.
Posted by George Jelliss at 10:29 No comments:

A Flurry of Snow 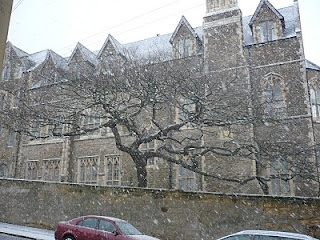 This morning I tried putting on the gas central heating for the first time. I had been nervous about trying it, not having used a system like this before, but it worked fine. There are just four radiators of various sizes, in the living room, bedroom, bathroom and hallway. The pipes connecting them to the boiler must all run under the floorboards. I've got no instructions about how to adjust the radiators, but fortunately they worked OK as they are. I turned the system off when I went out. I'm wondering how much gas it will use if I leave it on for any length of time. There is just £20 on the card that I have to put in the meter in the basement. Now I hear on the News that the UK has only 8-days supply of gas, and we are heading into a cold spell!

In the morning I took the bus to the Ravenside Retail Park at Glyne Gap on the way to Bexhill. This was to take a portable DVD player into Curry's. I'd bought it in Leicester in April 2008 but it has developed a minor fault. It keeps going back to the start, or comes up with the message that the cover is open when it is not. After an exchange of a chain of emails with Curry's Customer Services department it was finally established that it is "a code 5 product", which means they are unable to service it. Why this might be they haven't said, it probably just needs a stronger spring to keep the cover shut. All they offered was a gift card, of unspecified value, as a contribution towards a replacement. To get this I had to take it to the nearest store and demonstrate the flaw to the staff there. Of course it worked perfectly there, so it was a wasted journey, though it was a nice bright morning.

Later I went out again to get in some food and a paper. On the way back it bagan to snow very lightly, and this was soon followed by a heavier flurry. This is what the photo shows. It didn't last long here but it has been very heavy in other parts of the country and more is forecast for the next few days.
Posted by George Jelliss at 14:29 No comments:

I got an email from Mike Gunn about 6pm on New Years Eve that let me know there was a Variant chess tournament on at the White Rock Hotel. So I went along and took part. There were 14 players, and we played 7 rounds, a different variant in each round, the clocks were set at 7 miniutes per player. The variants were 1) Three-check chess, 2) Progressive chess, 3) Avalanche chess, 4) Triplet chess, 5) Pocket knights chess, 6) Static chess, 7) Losing chess. I scored 3 and 1/2. The winner with 6 points was a junior, who received the Encyclopedia of Chess Variants as his prize. This was an enjoyable way to end the year. I shall have to join the chess club and get in more practice. I've not played orthodox chess for at least ten years, and haven't felt confident enough to enter tournaments.

This morning I woke to find a layer of snow over everything, and a little still coming down. A pleasant start to the new year.
Posted by George Jelliss at 16:01 No comments: