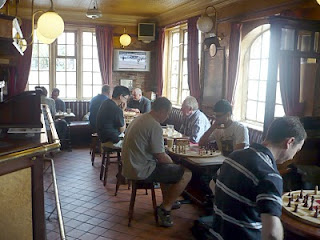 I went to Lincoln 24-26 July for the Circular Chess again as has become an annual custom with me. The B&B where I usually stay was booked up, so this year I stayed at the Hillcrest Hotel, which is in a very pleasant area overlooking the Arboretum. There were twelve entrants this year and an all-play-all tournament was arranged with each player getting fifteen minutes on the clock. This rapid-play I thought would not suit me, but I did win the first two games, but lost the rest on the time limit, despite often having a superior position. The heat also did not help. John Beasley was there, but only as an observer. The winner once again was Francis Bowers, who had the difficult task of meeting me in the last round. On the Saturday before the tournament I managed to get in a swim at the Yarborough leisure centre, but may have overdone it a bit, since I had a stiff back the next day, but perhaps that was due to the soft bed at the hotel.
Posted by George Jelliss at 19:55 No comments:

Today and yesterday I have been catching up with updating my flickr photostream which I had neglected for a long while. The idea is to put in it what are the best of my photos, although looking back some of those chosen seem questionable. Since they are available for anyone to copy (though please include an acknowledgment) they also tend to be images others may find useful. For instance some are shared with the Humanist Heritage Group on flickr. Nearly all are town and country landscapes, mostly devoid of people, which may say something about my solitary nature. I like to make pictures with the main subject clearly framed, with no bits cut off. I also like to try to see things from an unusual angle if possible. Some of the photos are classified into sets for the geographic areas in which they were taken, namely London (including Greenwich), Leicester, Lincoln and Hastings (including St Leonards).
Posted by George Jelliss at 00:14 No comments:

After a 25 year lapse of time I have at last completed this 50-page A4 PDF booklet which derives from the successful ‘Exact Echoes Tourney’ which was announced in Chessics issue 15 in 1983, entries being published in issues 17 to 21 and the award in issue 23 in 1985. Composers were asked to send in not only their original compositions but also outstanding examples of their previous work, or the work of others that they considered should not be missed, with a view to publishing a booklet on the subject. I have not so far attempted to bring the collection up to date to cover work done in the intervening years, but may yet make a few minor improvements. It is available on my publications page.

I've just noticed that in Safari, the browser I am now using, the box of text runs off the righthand side of the screen. This must be due to a different interpretation of the CSS instructions as compared with Internet Explorer. I must try to correct it.

I went to the Hastings Chess Club AGM on Sunday, but didn't find it a very encouraging experience. Perhaps I've had a glut of AGMs this past week. I was at the BHA AGM in London on Saturday, as reported on the Hastings Humanists blog, and the Arts Forum AGM on Tuesday. Fortunately I postponed the Hastings Humanists AGM to November. In July it is too hot to think.
Posted by George Jelliss at 23:26 No comments:

A Chequerboard of Afternoons and Evenings

On Tuesday afternoon I went the unveiling of some new sculptures at the "Chess Square" at the end George Street in Hastings Old Town. They depict a sea-horse, an octopus wrestling with a chess rook, and a sea serpent, I think. I didn't notice anyone from the chess club there, but there were several Councillors, including Dom Sebatian who sometimes comes to our Humanist meetings. The chess pieces for use on the board painted on the ground are kept in a cupboard against the wall of Butler's Emporium, and the key can apparently be obtained from the West Hill Lift Office, further along George Street, for a returnable deposit. It might be an idea for the chess club to put on a demonstration now and again.

In the evening I went to the AGM of the Hastings Arts Forum. It's a surprisingly large organisation, since the quorum required was nearly 50. They met in one of the sections of the Azur restaurant on the lower promenade. I was there just to see the venue and to get a better idea of the people behind the venture, and its recent history of recovery from financial problems.

On Wednesday afternoon I managed to arrange for a man from Sussex Bin Cleaning to come and clean our bins which were in a disgusting state. I found the company on the web, at the suggestion of my landlord, Mr Griffiths, since the Hastings Council do not provide a bin-cleaning service and indeed could not suggest anyone to do the work. He will be coming monthly to keep the bins clean from now on.

On Thursday afternoon Mr Griffiths arrived and took away most of the rubbish that had accumulated on the old sofa that had been dumped in front of the flats. I'm wondering what to do to stop more stuff being dumped there. Some plants in pots perhaps? The Council will remove fly-tipping but only of it is on public land, so perhaps that means redumping it on the pavement, although if you are seen doing that presumably there is a fine, so you can't win either way.
Posted by George Jelliss at 21:22 No comments:

It's A Humanist Life

I've not posted anything here for a while, since I've been mostly occupied with Humanism, which is dealt with on my other blog for the Hastings Humanists.

On 15 June My Humanist Hero essay on Robert Owen was published on HumanistLife. It was the second in what is now a long series.

I've also been contributing a number of biographical and descriptive pieces to the new Humanist Heritage site. For example, the entries for Down House, Leicester Secular Society, Alan Turing, Paul Dirac, and Richard Carlile are mostly mine, though of course the information in these articles is not new.

On 26 June I went to the BHA Conference on Humanism, Philosophy and Arts at Conway Hall.

On 3-4 July I went to Lewes to join in celebrations of Tom Paine.
Posted by George Jelliss at 22:47 No comments: