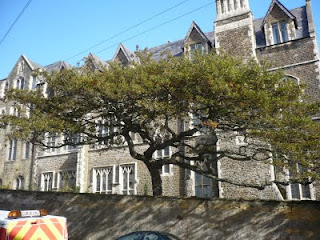 With the putting back of the clocks I'm feeling rather depressed and autumnal. So I thought another photo of my favourite tree would be appropriate to mark the passing of the seasons. Its leaves are distinctly yellowing and thinning out, but at least the sun was shining which prompted me to take the photo.

I seem to be getting more and more buried in papers. My solution to depression is usually to tidy things up, but I seem to have been tidying things up for years without much result.

Since I installed the new version of P C Guard on my computer everything seems to have slowed down considerably. I suppose it is checking everything more thoroughly behind the scenes, but more probably its just dithering about. It also seems to decide to make virus scans always just as I'm about to switch off. I suppose everyone has got to change over to Windows 7 next.
Posted by George Jelliss at 22:57 No comments:

I've been getting a lot of requests on Facebook for people to be Friends, although many of them I've never met. However I recognise many of their names, mostly from the chess and puzzle world, and some I've corresponded with in the past when I was producing my magazines like Chessics and Games and Puzzles Journal. Other names I don't recognise, but usually they are Friends of Friends. After some hesitation I've now decided to accept most of these requests. To keep things in order I've classified most of them as "Chessic Friends" to avoid getting them mixed up with Friends I've actually met from Hastings or Leicester.

Another Friend who has contacted me is an old school friend who was at St Olaves Grammar School in the 1950s. That is Russ Stanfield. He is the only person from that period that I have encountered. I joined the Old Olavians a few years ago and went to one of their reunions, held at the new school buildings in Orpington, but there was no-one there from the same time. They would all now be approaching 70, if they have survived.

I intended to go to Hastings Pier on Saturday to join the demonstration for the Council to do something about renovating it, but when I looked at the clock it was past twelve, and when I arrived there was no-one about. I did manage to go out in the evening to see the bonfire and fireworks display on the beach. It was rather noisy, and I'm not sure what it was celebrating, but it was colourful.
Posted by George Jelliss at 21:38 No comments:

According to a recent article in Science Daily, or at least the illustration accompanying it, DNA folds into a 3D wazir tour, similar to the 2D examples shown in my drawing alongside. These fractal-type diagrams occur at the end of a section of my Knight's Tour Notes website on Wazir Tours. For those not familiar with the terminology, a "wazir" is a chess piece that moves just to the adjacent square, like a single-step rook, or as in a king's non-diagonal move. A tour of course is a journey or path that visits all the squares of the board once only, without backtracking over any squares already visited.
Posted by George Jelliss at 19:29 No comments: 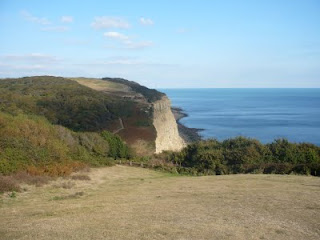 This photo is the one I took before the shadow photo. It is a view looking down into Ecclesbourne Glen. I walked down the hillside to enter the Glen via a gate at the bottom left. There are steps leading down that meet another set of steps going up the hill on the other side. At the bottom there is a narrow path leading down towards the sea. Whether it gives access to the beach there I don't know.
Posted by George Jelliss at 13:34 No comments: 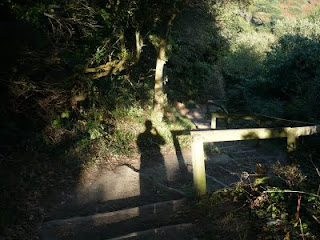 Feeling the need for more exercise I decided on a long walk this afternoon and made my way along the seafront to the fishing boats and climbed the steps up to the East Hill and along the cliff edge to Ecclesbourne Glen. There I followed the further steps down into the glen and up the other side. The photo above was taken on my way down the steps into the glen. I was surprised to find, when I put the image up on the computer, that my shadow seemed to have grown some sort of catlike tail! Once up the other side I took the route through the woods, ending up at Barley Lane. I found I'd taken 33 photos by the time I got back home. The sun was very bright in my eyes on the way back. On the way through the glen I met a man coming the other way, from Fairlight, and chatted to him briefly about the steps being rather uneven. On the way back our paths crossed again. He said he had come all that way just for his fish and chips!
Posted by George Jelliss at 20:15 1 comment: