Back in The Games and Puzzles Journal, #13 p.223 (May 1996), [the first issue of volume 2 which came out 25 years ago] the first puzzle was on "A Question of Proportion". It was about rectangles of various shapes including the standard paper sizes and the golden rectangle.

The 'Numberphile' videos on YouTube, some by Ben Sparks, have recently been featuring questions of this nature. I also borrowed from our local library the book One to Nine by Andrew Hodges which includes similar material, including the "Plastic" number.

Towards the end of the book Hodges implies that "Computable" numbers as defined in Alan Turing's famous paper are denumerable, that is they can be matched with the set of natural numbers.

I hadn't realised this before!

This also raises the philosophical question of whether any other "real" numbers "really" exist, if they cannot be calculated  by a finite set of rules. Such numbers are those that appear in Cantor's diagonal proof of the nondenumerability of the continuum.

All the usual suspects like root 2, root 3, the golden section, e and pi and Euler's constant gamma are all computable numbers. This just means that they can be computed to any number of decimal places and that the calculation by whatever method always gives the same digit in the nth place for any n.

They really are real real numbers!

Going back to my puzzle in the G&PJoutrnal the last question asked was: What shape of rectangle gives a smaller rectangle of the same proportions when a rectangle of m squares by n squares is removed from one end?

The answer was given in G&PJournal #14 p.245 (December 1996). By applying the same methods as for the golden ratio I found a formula for such a generalised golden ratio, in terms of m and n.

Some of these generalised ratios work out to be rational. The simplest case is when m=3, n=2 which gives the two Phi with suffix 3/2 as 2 and 1/2, but most of the ratios will be irrational.

Posted by George Jelliss at 10:43 No comments:

Here is another attempt at solving the Onitiu problem of constructing a knight tour with 90 degree rotational symmetry on the 18x18 board with the squares in a knight path (the red line). It uses two wazir moves in each quarter, equalling my previous result, making it an Emperor tour. 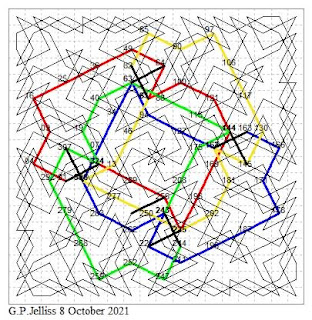 The pattern is considerably different from the previous example. So perhaps a solution is possible, if the exactly right configuration can be found. Or maybe two wazir moves per quarter is the best that can be done. Maybe someone could programme a computer to settle it.