I've had a touch of flu for several days, probably exacerbated by standing around in the cold on London Bridge station platforms last Monday. It's been making it difficult to get any sleep, since for some reason I start coughing whenever I lie down and try to relax. When it gets bad, the cough seems to go through my vocal chords so that it makes a mad laughing noise rather than a wheeze. I tried a packet of lemsip but it didn't seem to do any good. A mint toffee is effective for a while. Fortunately it now seems to be clearing up. I must get back to taking more regular exercise, haven't been swimming so far this year.
Posted by George Jelliss at 09:23 No comments:

Email ThisBlogThis!Share to TwitterShare to FacebookShare to Pinterest
Labels: health 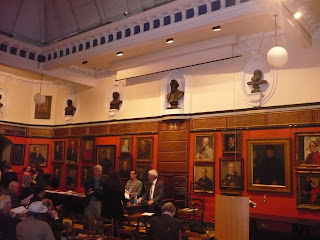 I took this photo at the AGM of the Rationalist Association, held on Monday evening in the Great Hall of the Art Workers Guild in Queens Square, London. This is a place I've not been to before. The bust above the big chair is of William Morris. In the middle Jim Herrick is talking to Caspar Melville (CEO of the RA, and Editor of New Humanist) and Laurie Taylor (Chairman). It seems the RA and New Humanist is making a determined move to be more active in promoting debates and vastly increasing circulation of the magazine. I asked whether this might mean some "dumbing down" of the content - not that I'm against this, I might be able to understand more of it!
Posted by George Jelliss at 10:37 No comments:

On Wednesday 18th May I went along to the White Rock Theatre to attend the Mayor-Making ceremony (the present Mayor was re-elected) and presentation of the Freedom of Hastings to former MP Michael Foster. Having to keep on "be upstanding" every time the mayor entered or exited was a bit wearing. It was curious to note that the conservative councillors still observe the ceremonial aspects by wearing reddish-coloured robes, while the labour side were in normal dress. The "processing" in and out could well also be done away with. The best part of the show were the performances by children from local schools, though one of the songs was mildly religious. The dance by the older girls was apparently to celebrate the suffragettes.

On Saturday 21st May I accepted an invitation to attend a meeting of the Freemasons Lodge formed by Old Olavians from my former school. This was held at the Freemasons Hall in Great Queen Sreet in London. This is a very large building, in art deco style, built as a memorial after the first world war. We were admitted to the so-called "Indian Temple" which is apparently only one of the smaller temples in the building, and treated to a talk by one of the Masters. The temple was a large rectangular room with domed roof. The masons in their ceremonial aprons sat on thrones, three at each end, and one in the middle of each side, with lighted candles in front of them.

According to the talk the masons are now purely a philanthropic organisation, raising money for work done by other charities like the red cross, or to supply equipment to local hospitals, although they also provide relief for old masons fallen on hard times. However they require applicants to declare belief in a "supreme being" to become a member, and swear their oaths on a bible, which rules me out. Though doesn't this now contravene discrimination laws, if they are not an explicitly religious organisation?

I'm afraid I found their costumes and their "processing" only rather comical. They made me think of Tweedledum and Tweedledee, especially as most of the members were of portly proportions. This may be a consequence of their dinners, there was one following the meeting which declined to attend, since it cost £35, a price that represents a whole week of dinners for me.

On Monday I'm due to attend the AGM of the Rationalist Association. I wonder if they go in for robes and ceremonials? I hope not.
Posted by George Jelliss at 12:03 1 comment:

I spent most of the Easter and May holiday week-ends watching the snooker world championship from Sheffield, in the hope that newcomer Judd Trump might win over the old guard John Higgins, and he came quite close.

Rather than abolish the May Day holiday break, surely it is time to fix the date of Easter closer to the Spring equinox, in March, so that the two holidays don't come so close. It's getting like Christmas and the New Year.

Much of the rest of my time was spent revising and checking the section on King tours on the Knight's Tour Notes pages, particularly the enumeration of the tours on boards of two ranks. The totals are given by recursion relations and by formulae involving the Fibonacci numbers. This proved quite troublesome, but maybe that's because my brain isn't working a smoothly as it did even a few years ago.

On the 2x8 board there are 128 closed tours, which is easy to verify, but the number of open tour diagrams works out to the surprisingly large, and surprisingly round number T = 32000. I still wonder whether I've got this right, but the other figures seem to be consistent with this. On the same board there are 584 reentrant tours, and G = 8176 geometrically distinct open tours, of which S = 352 are symmetric. These figures are related by G = (T + 2S)/4.
Posted by George Jelliss at 15:48 No comments: