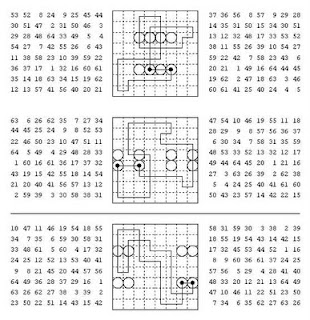 The image shows three diagonally magic rook tours that I constructed on 20-21 May 1986 but then seem to have forgotten about. (It was a busy year for me!) The tours have biaxial symmetry and each quarter tour is a bisatin (i.e. uses two cells in each rank and file). If the numbering is shifted by one quarter, so 17 becomes 1, 18 becomes 2 and so on, the rank and file magic property is automatically retained. However for the diagonals to remain magic there must be two numbers less than or equal to 16 in each (i.e. the bisatin has to be diagonal as well). The work was inspired by a less structured diagonally magic rook tour by J. Brugge that appeared in the German chess problem magazine Die Schwalbe in August 1985. Anyone care to enumerate all the diagonal bisatins that could be used?
Posted by George Jelliss at 10:33 No comments:

I've just been trying to remove two blogs from the list of those that I "follow", but there doesn't seem to be any way to do it. The instructions explain how to do it, and they are supposed to lead to a page where you can click a "stop following this blog" button. But they don't!

A day or so ago I uploaded a new page on King and Queen tours to my Knight's Tour Notes pages on the Mayhematics site. This is a page that has been waiting to be uploaded to the old KTN site for several years. There's stil a lot of other material, and updates to existing material, to be added. It's a continuous process.

I've been getting more involved with Twitter. I now have about 15 followers, have sent about 30 tweets and follow about 70 people and organisations. Mostly these are to do with mathematical recreations and humanism. One message led me to this site on mathematics by John D. Cook where the old subject of the misattribution of Beverley's magic tour to Euler came up, and I've contributed to the discussion.
Posted by George Jelliss at 18:19 No comments: 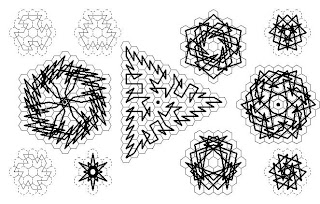 I have added a new page about tours of Honeycomb Boards to the Knight's Tour Notes pages. This collage shows a selection of results. Some date back to 1974 when I sent an example tour to W. Glinski whose Hexagonal Chess on a 91-cell board was popular. Others are new results. I've included wazir, king and knight tours that show various different types of symmetry.
Posted by George Jelliss at 09:26 No comments: