I thought I'd let my beard grow during the cold spell over the Winter Solstice, thinking that I would probably shave it off when the weather changed, but it seems I have now become attached to it, at least until any really warm weather should come along. I've also updated my photo here and on facebook accordingly.

This evening, having seen it previewed in the local paper, I went to the White Rock Theatre for an evening of nostalgia, where the Glenn Miller Orchestra was performing. The tunes were good, and some of the individual performers, but it was just far too loud. After the interval I tried moving further back in the Gallery but couldn't escape the sheer blast of sound. It was getting almost painful. So when they started playing something from The Sound of Music, which I certainly don't associate with the Glenn Miller era, I decided I'd had enough.
Posted by George Jelliss at 21:28 No comments: 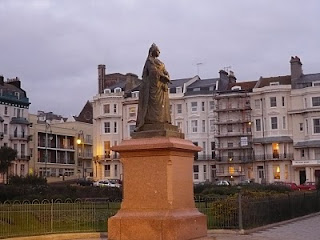 There was a spectacular sunset this evening around 4:30. I went out with my camera to try to capture an image, but by then the view had changed, first the sun came out from behind the clouds, then it quickly set. I got some images, but they were similar to others obtained before. I ended up on the sea-front by Warrior Square and noticed that the statue of Queen Victoria was illuminated with a spotlight and that the plinth seems to have been cleaned. Hence the photo shown here.

I did very poorly in the Weekend Chess Congress, playing in the Minor tournament, since I managed only a draw, and that was against the youngest competitor, where I ended up with a knight and pawn against two knights and pawn. The middle game of the five, played in the evening of the first day, was weird. I made a muddle of the opening and was well down, then somehow revived to fight back to a winning position, and then went to sleep again in the end game and threw it away. Sheer tiredness I think. There are another five games to go in the New Year tournament, which I suspect will be against stronger opposition.
Posted by George Jelliss at 20:22 No comments: