The Warnsdorf tour I published here a couple of days ago seemed remarkably symmetric compared with others of the type. So I thought I would see what it looks like when completely symmetrised. 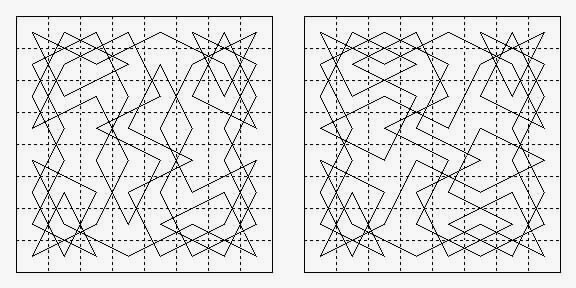 This is done by deleting all moves that are not part of a symmetrically arranged pair - which leaves 52 moves in this case - and joining up the loose ends to make a symmetric closed tour. This can be done in two ways as shown here.

Posted by George Jelliss at 15:19 No comments:

I'm making considerable progress with putting together a book on History of Knight's Tours and Related Problems based on my Knight's Tour Notes web pages and other unpublished notes.
The knight's tour of a Circular Chess board shown here appears in Volume 2 of Chess by Richard Twiss published in 1789, although it is shown there by numbers entered on the board. I've had to curve some of the moves for clarity. 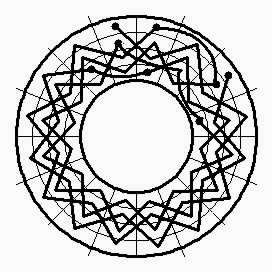 The details of this work were sent to me by the late Ken Whyld on 4 March 2002. Twiss reports having seen the round board in a manuscript in the Cotton collection. The text reads: "The figures on this board (in the plate) show the march of the Knight in order to cover the sixty-four squares in as many moves. This I found after four or five hours trial on a slate at different times; it probably has never been done before, and will be found much more regular than any of the like marches on the square board." The visual form is certainly much more striking than the numerical version! 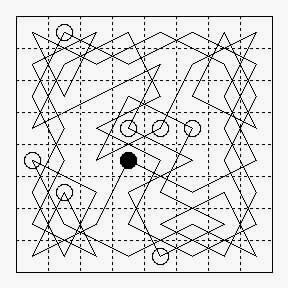 Posted by George Jelliss at 12:44 No comments: