Variant Chess: End of an Era

This Saturday we held the last AMG of the British Chess Variants Society. John Beasley and Peter Fayers came to my flat to settle the final details. So Variant Chess magazine, which I started in 1990, has now also come to an end. The final issue, appropriately number 64, came out in August. Thanks to everyone who has been involved over the 20 years.

Afterwards a small variants tourney was held at Hastings and St Leonards Chess Club. There were five players, so there were five rounds, with the non-playing person in each round choosing the variant for the others to play. The variants chosen were: 1. A game using the back-row sequence BRNKQNRB, 2. Progressive chess, 3. Avalanche chess, 4. Balanced Marseilles chess, 5. Cylinder chess.

The players and their scores were: George Jelliss 0, Bill Penfold 1, Rasa Norinkeviciute 2, John Beasley 3, Patrick Donovan 4. So Patrick won the prize which was a bound set of Chessics magazine. My best game was in the Progressive chess where Rasa had to find a difficult eight-move series to give checkmate. Thanks are particularly due to Mr Penfold for making the effort to master the unfamiliar rules, particularly of the cylinder variant, and to the Club for permitting our use of the venue.
Posted by George Jelliss at 12:13 No comments: 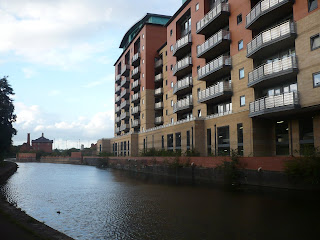 There didn't seem to be any trains scheduled from Victoria to Hastings so I walked again to Charing Cross. This is quite a pleasant walk, via Buckingham Palace, St James' Park, Admiralty Arch and Trafalgar Square, though I was carrying too much in the form of provisions I had bought, but over-estimated, for self-catering purposes in Leicester. The next day I felt quite tired. I don't suppose I will be going back to Leicester again for some time; there is the AGM of the Society in November, but I don't think I want to get involved in their politics again.
Posted by George Jelliss at 19:50 No comments:

A Day Out in Brighton

Yesterday, 1st September, I took the train to Brighton with the aim of attending the meeting in the evening of the Brighton and Hove Humanist Society. The speaker was Denis Cobell, a former President of the NSS, on "Why I am Not a Christian", though in fact it was mostly about his upbringing, in the Brighton area, within an Evangelical family.

Since the talk only began at 8 pm I spent most of the three hours preceding in the Odeon cinema, watching a very noisy film, "Inception" starring Leonardo DiCaprio which was about people who could set up realistic dream worlds, and dreams within dreams. Coming out at the end I wondered if I was back in the real world or not, especially as the way out of the cinema was something of a maze.

Another reason for going to Brighton was to visit the Apple store with a view to perhaps changing my computer for an iMac or MacBook. However the only address I had was Churchill Square which proved to be a large shopping mall, and despite walking round most of it, never found the Apple store, or any map of the place! I did get some fish and chips at the BHS restaurant, and a couple of cotton Oxford shirts at the M&S store opposite (since they don't seem to be available in Hastings).

I also found time to sun myself on the beach for a while, though Brighton Beach was indeed very crowded, as it is traditionally supposed to be.
Posted by George Jelliss at 08:08 No comments: