The first thing I noticed on seeing the figures from the Warnsdorf 1823 book, is that the final figure #96 is a tour of squares and diamonds type! This seems to have been added as an afterthought and is preceded by a diagram in which the squares and diamonds are lettered A, B, C, D using a different type style in each quarter of the board.
This confirms Murray's statement that 'The first composer to give the figure which shows that the cells of the quadrant could be filled by four closed quartes was v. Warnsdorf (1823)'. However the diagram is not in graphic form, and strangely Murray made no mention of the accompanying tour!
Warnsdorf shows tours in numerical form. Here is the tour diagram in graphic form: 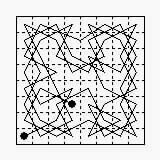 This means that Warnsdorf has priority in the showing of a tour of squares and diamonds type. The previous earliest examples I was aware of were the two given by "F.P.H" in 1825 and the near-magic tours in the study by C. R. R. von Schinnern in 1826.


Posted by George Jelliss at 20:12 No comments:

Warnsdorf from the original source

Thanks to the Cleveland Public Library, Ohio USA, I have now been able to study the diagrams in the 1823 book by H. C. von Warnsdorf. The figures relating to his Rule ("Always move the knight to a cell from which it has the fewest exits") are numbers 32 to 39 in Table 5. He begins by applying the rule to the 6x6 board, with four examples, then goes on to the 6x7, 6x8, 7x8 and 8x8 boards, giving one example for each.
Warnsdorf's tours are shown with the cells numbered in the sequence visited by the knight, but here we show them in geometrical form. A black dot indicates the start cell, and a dark circle the end cell. A circle round the initial dot indicates that there are choices of first move, though this may only be because of symmetry. The light circles mark points where the rule provides a choice of two or more moves, so that alternative routes could have been taken. 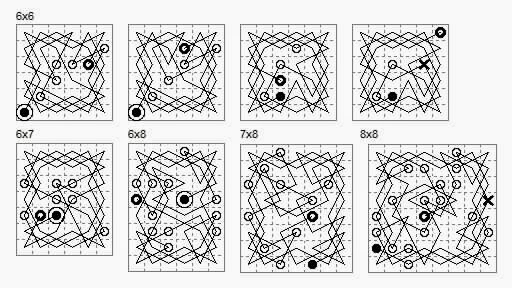 In the fourth 6x6 example the move e4-c3 (marked by a cross) does not conform to the rule, which requires e4-f6 as in the third 6x6 example. Similarly in Warnsdorf's 8x8 example there is a deviation from the rule at h5. The correct move should be to f4 which has access to only two exits whereas g7 and f6 have three. However these deviations only go to show the robustness of the rule, since in each case it still goes on to complete a tour.