When I got back from my walk yesterday I was glad to see the scaffolders starting to remove the last layer of scaffolding from round the building. It had been there since March 2015, as reported here on 16 April 2015. Here is how the building looks now: 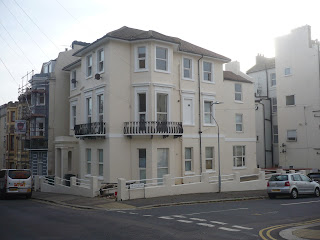 There remains some rubbish to be removed, but the contractor wants more money to remove it all, and passers by keep adding to the pile. At least I can now see out of the windows. I cleaned them yesterday afternoon.

Posted by George Jelliss at 15:09 No comments:

I noticed what looked like a large white tea-caddy on top of the structure on the pier yesterday evening as I walked along the prom. When I went to have a closer look it turned out to be a camera obscura. It was occupied by some giggling children so I didn't get to look inside behind the curtain.

My feet were feeling uncomfortable this morning. I've come to the conclusion it is due to the more flexible shoes I've been wearing, which may be giving my toes too much exercise. At least I hope that's what is the cause. It may also be that they retain too much heat. I had to cut short my visit to Leicester on 10th to 14th September because my feet had had enough of walking around.

This morning I got the urge to go for another walk, so put on an old pair of shoes with a hard sole, though they need a repair to the worn-down heels. I found a new path round the Hastings Museum which comes out at Cornwallis Gardens where the chess club is. The shoes proved satisfactory. I got as far as the top of West Hill, by the Castle, and came down the steep steps to the sea-front.

There weren't many people about at 8 am, but there were quite a lot of runners practicing circuits by the pier as I came back. I'm not tempted to join in. Must now repair the heels, as I had intended for at least a year, having bought the materials, but never got round to the task. A Saturday morning exercise may be a good idea on a regular basis.

Posted by George Jelliss at 10:10 No comments:

Adventure of the Halogen Oven.

The halogen oven that I have had for a number of years broke down on the 4th of October, and there seemed no prospect of getting it repaired, since it is no longer in the Easy Life catalogue.

So I ordered a new one from Tesco Direct. They took the payment from my bank account and claimed the item had been dispatched on 12th of October, but it never arrived, though I stayed in all day waiting for it. According to their delivery system, which seems to be independent from Tesco, they attempted to deliver the goods but they were refused. I can only assume they tried to deliver it to the wrong address. No one contacted me by phone to say the goods were on their way, which is the usual procedure. They didn't offer to try to deliver it again to the right address. At any rate, after the exchange of a couple of emails they did refund the money to my bank account.

So yesterday I ordered a similar oven from the Argos catalogue and went along this morning to pay for and collect it myself. That all went OK. It has proved to be a bit larger than I thought, but I shall try it our this evening. I didn't take up the £9.99 offer of replacement if it breaks down within three years, since surely anything that does not last that long isn't worth replacing.

Posted by George Jelliss at 15:12 No comments:

It is time I gave an update on my work in putting my Knight's Tour Notes webpages into book form. This is a project I have been working at for years. The current proposal is to put all the material into a series of eight separate monographs, each of around 100 pages.

The subjects of the studies are roughly as follows. The numbering is provisional. 1. History of Tours. 2. Knight-move Geometry, 3.Small-Board Knight Tours. 4.Symmetry in Knight Tours. 5. Simple Linking of Pseudotours. 6.Shaped Board Tours. 7.Leaper Tours. 8. Magic Tours.

The first six titles are almost entirely about knight tours. The last two include tours using pieces with other moves. The magic tours end with magic squares that use up to four different types of move.

If my health holds out I aim to get this completed by the end of the year. I've given deadlines before and not met them, but this time I'm more confident.

Posted by George Jelliss at 15:04 No comments: