A Study in Light and Dark 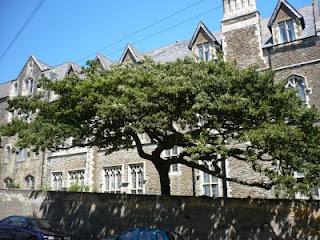 Another photo of my favourite tree! The last few days I have been struck by the contrast of sunlight on the walls of the college and the dark shadow of the snaking tree branches at a certain time in the afternoon. This contrast is a result of the angle of the sun at the time, and the shade provided by the now full spread of the oak's leaves. It occurs to me that the midsummer solstice has just past, so perhaps I'm experiencing reversion to old ancestral Druidic worship of sun and oak trees! Atavism isn't it called?
Posted by George Jelliss at 15:22 No comments: 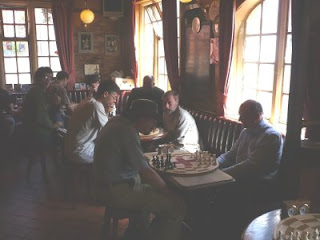 I went by train to Lincoln on Saturday for the World Circular Chess Championship held on the Sunday at the Tap and Spile pub, returning today. Unfortunately the photos I took have not come out very well, either because the internal views are too dark, or have come out fuzzy due to my bad handling of the camera. This photo taken by Hermann Kok using my camera shows the problem. Despite some enhancement of the brightness, I'm still just a silhouette against the bright sunlight outside.

It was pleasant to meet some old acquaintances from my attendance at previous Circular Chess Championships. I didn't manage to win any games, but think I put up a good fight. The first game I lost to a checkmate, which was apparently a surprise to my opponent as well as to me. The other games I lost with the fall of my flag on the clock. The time allowed is just half an hour for each player, so a game can take an hour at most.
Posted by George Jelliss at 22:46 No comments:

I've been making progress in sorting out all my notes on knight's tours, with the idea of putting the material into book form. So far it consists of a mere 75 chapters covering 500 pages! And there are still a lot of files I've not incorporated, plus material not yet put into electronic form. The secret to making progress I've found is to stick to one simple standard layout (A4 pages with 1 inch borders and diagrams with cells 1/5 inch width.) In the past I've tried out numerous different forms, with consequent difficulty in editing them all together. Once I've put everything in it will be time to be more selective in deciding the final contents. It may of course make several books, aimed at different readerships.

On Sunday Radio 3 was devoted to a series of programmes on Haydn, and I listened to quite a lot of them, particularly the symphonies and quartets. His music went well with a warm sunny day. I think he had a sunny disposition.
Posted by George Jelliss at 11:24 No comments: