Here is another knight tour on the 6 by 6 board with the square numbers in a closed knight circuit. 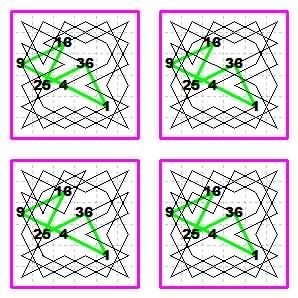 They differ only in the route taken from 25 to 36.

Posted by George Jelliss at 18:30 No comments:

Back in Chessics #22 (1985) I published a solution to the 1881 Carpenter problem of making a tour with the square numbers in sequence along the first rank, and found the solution was unique.

However it has only recently occurred to me to try the similar Dawson problem of a tour with the square numbers in a closed knight circuit. Here is a solution I found late last night, or early this morning, after examining nearly 70 arrangements of the numbered circuits.

It has been known for a long time (apparently in Chess Amateur though I've not located the exact reference) that there are 25 such geometrically distinct circuits. One is too large to fit on the 6-board. The others can be placed on the board in various positions (81 at my last count), and the numbers can be placed on them in up to 12 ways, though many cases are easily eliminated. For instance in the above diagram the node at f5 must be an end-point (1 or 36) since there is only one other move available there.

Addendum: Found another solution mid-day today. This one uses a symmetric circuit.

The occurrence of two-move straight lines in both solutions is surprising.
Posted by George Jelliss at 08:46 1 comment: