The Book Nobody Read

This is the title of a book I've borrowed from the local library, and found a good read. It is subtitled "In Pursuit of the Revolutions of Nicolaus Copernicus" and is by Owen Gingerich, a Professor of Astronomy and History of Science at Harvard. The title comes from a comment by Arthur Koestler in his book The Sleepwalkers, which also has a long subtitle: "A History of Man's Changing Vision of the Universe" (1959). This has long been a favourite book of my own. Koestler thought that nobody actually read Copernicus. Gingerich spent years examining all the extant copies of the first and second editions in European and American Libraries to produce a Census detailing their differences and annotations. The books were issued as loose sheets and it was up to the buyer to arrange for the binding, so they tend to vary a lot and can be individually identified. He has often been called in to identify stolen copies that come up for auction. Some examples, that he calls "sophisticated ladies", are made up from two or more damaged copies. Quite a high proportion of the original editions survive, and everyone who was anyone in astronomy evidently had one, and often annotated them. I was always taught never to write in books, but it seems annotated books are of greater interest to historians, so perhaps this advice was wrong!
Posted by George Jelliss at 11:57 No comments: 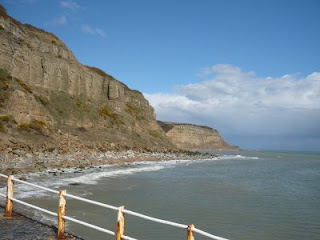 Yesterday I walked along to the end of Rock-a-Nore Road for the first time since returning to Hastings. This is as far East as one can get in Hastings at sea-level without walking on the beach. There are warnings of rock falls beyond that point. The photo is of the cliffs towards Fairlight. Before reaching this point one passes the few remaining fishing boats pulled up on the beach, and the famous fishermen's huts. There are also museums and an aquarium and amusement park. It is near here on the area called the Stade that it is proposed to build the controversial Jerwood Gallery. It does seem to me that there is far too much concentration of attractions in one area, while the other end of the promenade, as far as West St Leonards, is neglected.
Posted by George Jelliss at 10:35 No comments:

I updated my Flickr Photostream last night with two photos from the day, and others dating back to October. There are now 51 photos there, nearly all landscape scenes. They are just those that I think are the best ones. They are open for anyone to use, so I don't include photos of a personal nature, like portraits of family members.

I can't take any more photos at the moment because the battery is out of power and I seem to have mislaid the charger, and can't find it despite having looked everywhere I could think of. I dare say if I buy a new one the old one will turn up.

Edit: Fortunately Jessops (the camera shop in Hastings) didn't have a charger of the right type, so I was saved unnecessary expense, because I later found it in a box, nothing to do with photography, hidden within another box. Why it got put there I've no idea! I had the same sort of problem with a pair of scissors last year, but it was months before they turned up - in a box I'd looked through several times. Such is the way of the world - or is it a further sign of the way my brain is going?
Posted by George Jelliss at 10:56 No comments: 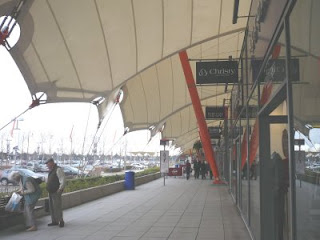 I've been meaning to get out while the sunny weather has been here the last few days so took the train to Ashford to look round and to buy a lighter coat for the summer. I found on the internet that the nearest Cotton Traders shop was in the "Ashford Shopping Village", which seemed an interesting development, seen in the aerial view from the Google map. As shown in the photo it consists of a parade of shops surrounding a car park and covered by a tent-like roof. So thought I'd look in there to see what their products were like, rather than risk ordering by post. It turns out that it has been rather oddly renamed the "Designer Outlet Village". I tried on some of the Cotton Trader offers, which however seemed different from those in their catalogue, and ended up buying a jacket in the M&S store there. I also walked around the town centre which is well stocked with shops and malls. The road leading there is where their strange new modern art style street lamps are, which have featured in the news recently. Apart from this it is much like most other towns these days.
Posted by George Jelliss at 20:52 No comments:

As anticipated, my old ntlworld site has now disappeared from the web. I had already transferred the files on mathematics and chess topics to my mayhematics site. I have now completed the process by transferring the other files which consist mainly of essays and compilations on various topics. They are classified in three sections, Words, Reality and Fantasy. Their new home is:

This was not how I originaly envisaged the layout of the mayhematics site. Maybe I've now got too much disparate stuff all squeezed into one space.
Posted by George Jelliss at 10:50 No comments:

I was at the HWG meeting last night and was most impressed by the quality, quantity and humour of entries to their competition for writing a piece of up to 1000 words "In the Style of" some named author. Those imitated, parodied or ripped off were Colin Dexter, Joanne Trollope, Flanders and Swan, Mills and Boon, Pam Ayres, Proust, Longfellow, Brendan Behan, Damon Runyan, and probably some others I've failed to recall. My contribution was a chess-related version of Longfellow's "Excelsior". The next competition is for a 2000-word mystery story; I must start making some notes of ideas.
Posted by George Jelliss at 09:37 2 comments:

In the Swim at Last

This morning I went for my first swim since moving back here. Not in the sea of course, in the baths! I'd bought a "leisure pass" back on 8th February, but have delayed using it for fear of having another nose-bleed. Fortunately that now seems to have cleared up. The nurse who checked my blood pressure (which turned out to be perfectly OK) seemed to think it was just due to a weak blood vessel; but what made it weak? - the bad cold I had in November I suppose. The lockers are now operated by a pound coin (it used to be 50p) but of course you get it back afterwards. The key comes attached to a plastic buckle, and it took me some time to discover the knack of fixing it to one's own wrist. Now I've got to get into the routine of a regular swim, once or twice a week.
Posted by George Jelliss at 20:50 No comments: 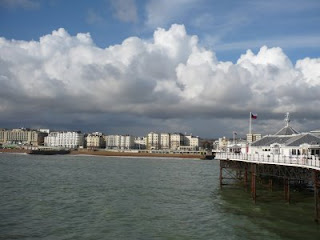 I went to Brighton on Wednesday (4th March) to attend a meeting of the Brighton & Hove Humanist group, as further reported on the Hastings Humanists blog. In the course of the day I took a number of photographs, particularly of the cumulus clouds that were rising high over the city. This one, taken from the pier, is by far and away the best, although it may give a misleading impression, since it was a bright sunny day.

Besides walking round the pier I also visited the Art Gallery, in the Dome, where there is an interesting exhibition showing paintings in related but contrasting pairs. Since the late trains back to Hastings require changing trains, and I think platforms, at Lewes, I arranged to stay overnight. But the next day I felt curiously depressed, so after a further walk (via Montpellier Road and Seven Dials) came home on the 10:32 Ashford train.
Posted by George Jelliss at 21:59 No comments: