A day or two ago I finally got round to updating the Words section of my website. There is not much difference really except in the presentation, which now makes use of CSS (Cascading Style Sheets) to ensure the pages are in a consistent style throughout. There is a lot more to CSS that I need to learn, I've only used the basics to determine the background colours, typefaces, margin settings and suchlike.

In the simplified spelling I've gone back closer to the orignal 1997 article, though with j used for the th sound in 'then' and q for the indefinite vowel. The only new feature is the use of th for the tch sound in 'match' and dh for the dge sound in 'hedge', which I consider an analogous use of h as for sh in 'fish' and in the combination zh often used for the sound in 'leisure'. It always seems to me that there must be another little tweak somewhere that will make the system better, but when I try it there is usually some unforeseen problem. I'll probably come back to the question in another three years.

The z-section, which used to contain the verse anthologies, is now devoted to lists of links, and the s-section whch contained the stories is no more. Instead they are all in the w for Words section.
Posted by George Jelliss at 19:42 No comments: 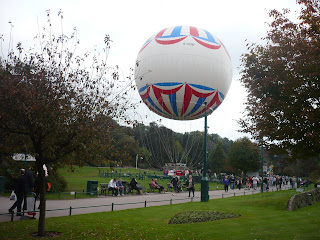 Around the 7th October I got the idea into my head that I should play some more chess and enter the Bournemouth Congress which was on the next weekend 14 to 16 October. Thanks to the internet and email I managed to send an entry form, book a bed and breakfast for two nights and work out a railway journey, along the south coast, changing at Brighton and Southampton Central.

The travelling went very well apart from getting a slow train from Southampton and having to change again at Brockenhurst, to catch the Cross-Country train from Manchester that I should probably have caught in the first place.

This was the first time I'd been in Bournemouth since the memorable BCPS weekend there in 1989. The weather was excellent and I did a lot of walking around the central areas of the town; probably too much as by the end I was struggling to get up the hill to the venue with a stiff right knee.

My results were as poor as at Leicester, winning only the last game, and that only because my opponent blundered away a rook, and refused to agree a draw, which I thought would have been fairer, since he had played well and had the advantage up to that point. There are photos of the event here.

Since I got back on the Sunday night I've been feeling pretty tired and have endeavoured to take it easy and rest my brain and my leg. The photo is of a tethered balloon on which people were booking rides in the Winter Gardens.
Posted by George Jelliss at 23:07 1 comment:

I spent the weekend from Thursday 29 September to Monday 2 October in Leicester, playing in the Chess Congress and attending meetings at Secular Hall. The weather was very hot and sunny, not what I had expected for this time of year, and not ideal for playing chess. However I suppose I can't really blame the weather for my poor results, just two draws (in the first and fifth games) and one of those was against a junior.

At Secular Hall there was a lecture on 29 September about the situation in Libya, though the speaker was a supported of the Gaddaffi regime, who described his 40-year rule as a type of socialist utopia! What is going to happen there in future is of course difficult to predict. On Sunday there was a meeting of a new History Group in the afternoon, and in the evening a most interesting talk on Thomas Babbington and his friends and family and their work for the abolition of the Slave Trade. They did a lot of the work in preparing evidence for William Wilberforce to use in his speeches in Parliament (from which Quakers and nonconformists were excluded).

I travelled to London by train, and to Leicester by coach. On the return journey, also by coach from Leicester I thought I would try the coach to Hastings. This proved to be a mistake, as the so-called 'Express' took nearly 4 hours! It began by going south-west to Mitcham, and so on to Coulsdon and East Grinstead. Then it went on a grand round tour of East Sussex, stopping at Uckfield, Hailsham, Eastbourne, Pevensey, Bexhill and other places.
Posted by George Jelliss at 11:36 No comments: