Chess and the Brain

I've been playing in the Hastings Christmas Morning and Christmas Afternoon chess tournaments over the last four days, and managed to score 1.5 in each (i.e. one win, one draw and two losses). No prizes for that, but I'm in it just for the practice, since I haven't played orthodox chess for many years.

I'm also entered in the Weekend Congress, and the New Year tournament next week. This is probably too much really. I'm already quite tired. The draws which both went to over 60 moves were particularly wearing. At the end of my last game this afternoon, which I was fortunate to win, I think we were both punch drunk; I'm sure a lot of the moves will make little sense when seen in the light of day.

There was an interesting item on the Today programme yesterday (I think) where it was claimed that Liberals have a developed "Anterior Cingulate(?) Cortex" in the brain, while Conservatives have a stronger "Amigdala(?)" (a primitive, reptilian, part of the brain). It was questioned whether this was from birth or whether the brain differences developed due to experience. I'm hoping my chess exercise will help stop my brain from subsiding into Alzheimers, as it seems to me to show signs of doing.
Posted by George Jelliss at 21:47 No comments:

There was a programme on BBC Radio 4 this morning about John Wyndham, the science fiction writer. I meant to listen to it but as usual got engrossed in something else and forgot. But fortunately it is now possible of course to use Listen Again.

He was a writer I grew up with in the 1950s, and I read all his books, probably from the Public Library, and have returned to them from time to time, and picked up second-hand paperback copies a few years ago, when I joined the Leicester Science Fiction, Fantasy and Horror group, and compiled my Guide to Fantasy Authors and Tales (which I must update some time).

I've always been fascinated by his full name which was John Wyndham Parkes Lucas Beynon Harris, as if he was named after a team of some kind! He used various different combinations of these names for his fiction. His "John Wyndham" style matured after his experiences during the second world war.

In the programme it was mentioned that he called his novels and short stories "Logical fantasies". It seems he was an atheist, since he intended to leave the rights in his royalties to two daughters of a friend or relative, but changed his will when one of them went into a convent as a nun. He also lived in London at something called the Quaker Pen Club, which I'd not heard of before.

I must read The Chrysalids. I seem to have missed that one.
Posted by George Jelliss at 22:57 No comments:

I've been considerably expanding the pages of My Chequered Career in the Chess Problem section of my website. This is intended to provide a record of my chess problem compositions and the ideas they illustrate. Besides well known pieces like Grasshopper, Nightrider, Leo and Mao, the additional pages also include the other bifurcating hoppers Eagle and Sparrow, and the Clockwork Mouse, as well as variants like Antipodean Chess and Arrow Chess. There are still a lot of compositions to be added. I was hoping this exercise might stimulate me to do some more composing eventually.
Posted by George Jelliss at 16:59 No comments:

I bought a bag of assorted biscuits on Saturday, which had an illustration of chocolate chip cookies and bourbon creams on the cover as well as plainer types. When I opened it however the only chocolate biscuits in it were a few fingers. Almost all the contents was shortcake. There is a disclaimer on the back that says "the assortment may vary ... due to product availability", which must be of dubious legality. The trader was unwilling to give me my £1.49 back and advised me to contact the manufacturers, a company in Rochdale. So I have sent an email to the Tradings Standards office in Eastbourne. The money of course is not important, but there must be a lot of people buying biscuit assortments at this time of year, so there must be quite a bit of profit to be made from such a cheap scam.

Also on the shopping front I've been looking for a waterproof or showerproof jacket, but why are they all so dull? There used to be a road-safety slogan: "Wear something light at night" and white jackets were readily obtainable. Now there is nothing. Maybe depression is the fashionable image, to match the weather and the financial climate.
Posted by George Jelliss at 15:40 No comments: 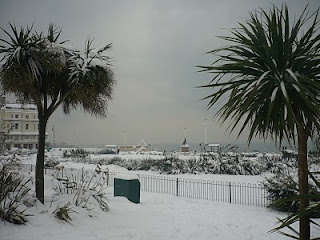 This is a photo I took yesterday of Warrior Square Gardens looking out towards the sea and the statue of Queen Victoria. A contrast of tropical plants and arctic weather. The sky was very dull and overcast, but we only got a small further dusting of snow.

I put on my Polish snow boots and ventured out to the nearest Spar store to get some milk for the weekend. They only had a small supply and were out of bread, apart from some "petit pain" apparently baked in the store; no delivery lorries making it down the A21, and I don't think there were any papers, though I wasn't looking for any.
Posted by George Jelliss at 11:16 No comments: