In my booklet on Figured Tours published in 1997, there is a knight's tour, A5 on the 8x8 board in which the first nine even numbers form a magic square. The tour is by T. R. Dawson and originally published in Vie Rennaise 19 November 1932. It led me to wonder if the same task could be done on a smaller board of minimum size.

The 3x5 board with a cell added at the middle of each side is of 19 cells, that can be chequered to show 9 dark cells in the form of a diagonal square and 10 light cells. Unfortunately this board has no knight tour, for the same reason as the 3x5 board, formation of a closed path firmed by the knight moves available at b3 and f3.

However if the extra cells are added on the long sides to form a rotary symmetric board as shown below the board becomes tourable. In fact there are 62 symmetric tours. Among these there are just six in which the square formed by the even numbers is magic. As shown here: 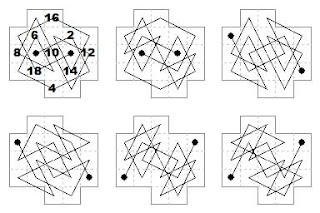 I wonder if this result can be new?
Posted by George Jelliss at 22:12 No comments: 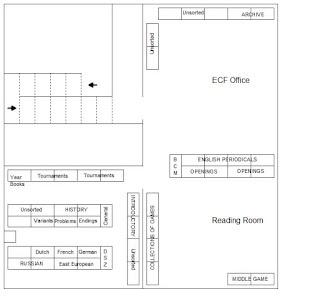 The Library is made up of a number of separate collections, the largest of which are the ECF's own collection and that from Harry Golombek. The books are labelled to show which donor collection they are from, and are now mostly arranged on the shelves by subject rather than collection. Because of the way the Library has accumulated there are many duplicates. Duplicate periodicals are being stored in the loft and duplicate books are on the bottom shelves. The Library is open for visitors, but the offices are closed at week ends.

Posted by George Jelliss at 21:22 No comments: