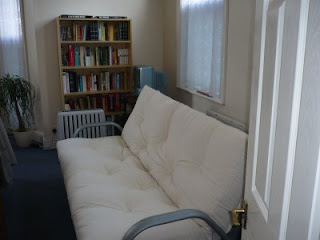 I left my rather old sofa behind in Leicester, so that since I moved I haven't had any soft furnishings in my living room. I looked round various furniture stores without finding anything similar. Then in the window of a small shop, I spotted an illustration of a thing called an "Oslo Futon". This seemed a rather curious mixture of Nordic and Japanese, but the design appealed to me. It was delivered through my bedroom window this morning, in the form of a flat pack and a roll of mattress, and I spent a couple of hours putting it together. The base is metal and held together with nuts and bolts, rather like Meccano which I used to enjoy playing with when I was about seven. It also folds flat to make a bed. It's possibly a bit large for the room, and heavy to move, but at least I've now got somewhere soft to sit.
Posted by George Jelliss at 19:37 2 comments:

Water down the Walls!

I just noticed, as I switched on the computer this evening, that there was a trickle of water coming down the wall I am facing! On checking with the other flats above I find that Flat 4 has worse damp stains in the same position. The water is apparently coming from Flat 5 on the top floor, and they say it has been reported before to the landlord and agents. I will of course do the same, and would expect something to be done about it reasonably quickly.

I've now transferred all the material I had on floppy disks to my laptop, and backed it up on a single memory stick. So I now have some 200 disks to dispose of (and a Mitsumi floppy disk driver surplus to requirements). Does any one still use floppy disks? Or will I just have to dispose of them to waste somehow?

Edit (9:25 pm): After writing the above, I closed the computer and put on the radio to listen to Classic FM, and it turned out that the theme for Henry Kelly's "Classic Ephemera" programme was - Water! It's a strange thing, coincidence, isn't it?
Posted by George Jelliss at 20:20 2 comments:

First thing this morning, around 8:30am, I had the rather surreal experience of seeing lots of quite large spheres floating by down the hill. This made me think of that TV series The Prisoner with the late Patrick McGoohan, who was pursued by a large white sphere whenever he tried to escape. Of course what I was seeing were soap bubbles. Who was producing them, further up the hill, I couldn't see.

As reported on Hastings Humanists blog I have now rejoined Facebook, though I've never got on very well with its workings. All my previous contacts in Leicester, and with family members, will have to be reestablished. Some of the systems seem to have been redesigned, such as having several different Friends lists, which seems sensible. But they still don't seem to have heard of Hastings, or St Leonards on Sea, as existent places, as opposed to other Hastingses in the USA.

There has been a lot of activity here today, with new tenants moving into the empty Flat 2 in the building where I now live. The people in Flat 4 also moved in recently. There seems to be a lot of rapid change. We still get lots of letters addressed to people who no longer live here. I put them back in the post for return to sender, marked "not known" or "gone away", but it takes a quite while to stop them.
Posted by George Jelliss at 22:30 3 comments:

Monday was wet and windy but the threatened snow didn't appear, at least in this area. When I went out in the evening to the Hastings Writers Group, water was pouring in streams down the hills towards the sea, but it was all draining away and not forming floods. Since thene it has been bright but cold. Nine of us braved the weather for the meeting, at which we were to comment on some manuscripts written by three members. I would have preferred a less formal approach. Filling in a form, I found little to say.

Since I had a bad cold back in November I've been troubled with a series of nose-bleeds, about one a week. After a couple at the week-end I had another minor one on Wednesday while vacuuming the hallway. This prompted me to see the doctor this morning in case it signifies something worse. Perhaps my blood pressure is up due to my efforts in organising the Humanist meeting, or it could just be the cold air. I've not had this before, but I think the amount of blood that soaks into hankerchiefs makes it look worse than it is. The key is to hold the nostril closed until the blood has time to coagulate and block the flow.
Posted by George Jelliss at 14:11 2 comments:

It was a lovely bright morning and I went for a walk, to dispose of some jars and bottles at the recycling centre, and buy a leisure pass at the swimming pool. More pleasant was a walk through the Falaise gardens and along 'Bottle Alley' below the Promenade. There at midday the sun was warm and sparkling off the calm sea. But the forecast for tomorrow is dire; wet and cold and possibly much more snow.

I've been transferring lots of old files, still kept on floppy discs, onto a new (well, reconditioned) laptop. My notes on such things as Knights Tours got into something of a muddle, it being difficult to distinguish which version of any article was the most recent version and which an old backup. My aim is to update my website on that subject and if possible complete a book summarising the most interesting results. Similarly with my other interests.

Now that, in St Leonards on Sea, I'm connected to the internet via Virgin Broadband over a BT telephone line I no longer have access to update the ntlworld website that I set up when I had a cable connection in Leicester. Even though these are both parts of Virgin Media they don't seem to be cooperating with each other.

Accordingly I am gradually transferring material from that website to my Mayhematics site. Last week I moved the "Rational Mathematics" section. Today I will be moving the "History of Ideas" and "Science Overview" sections. Later I propose to move the literary and philosophical sections.

Meanwhile I will keep this blog for personal details. I also decided to close down my connection to Facebook, since I found it difficult to operate. I much prefer this blogspot system for connecting people with like interests.
Posted by George Jelliss at 12:45 2 comments:

An Unproductive Morning with Power Cuts

There was a power cut here 7:45 - 9:15 this morning. Fortunately I still had some matches (instead of the electric spark) to light the gas to make coffee, wash and shave and boil milk for my breakfast cereal. That was the second power cut since I've been here, the other was on Saturday 24 January about 4:45 - 5:30 pm. The cuts affected the surrounding area, but I'm not sure for how far.

I went out about 11:30 intending to get a train to Lewes (as reported on my Hastings Humanists blog) but decided instead to go down King's Road to buy a paper, only to find the shops there all in darkness from another power cut. It didn't extend as far the shops at the bottom of London Road. When I went back for the paper the lights were on again.

Perhaps whoever looks after the electric supplies (National Grid?) are trying to share out the cuts among different areas. Or is this just a poorly connected area?
Posted by George Jelliss at 15:06 2 comments:

View from my Front Door 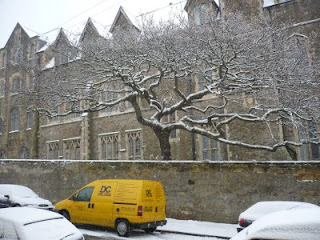 This was the view from my front door around mid-day today. Snow on an old oak tree.
The tree is in the grounds of an organisation called "The Society of the Holy Child Jesus Community".
Posted by George Jelliss at 15:06 2 comments: