The original double latin square by E. T. Parker in the 1960 paper, differs from the version shown as the frontispiece in the Coxeter/Ball Mathematical Recreations, in being more geometrically regular: 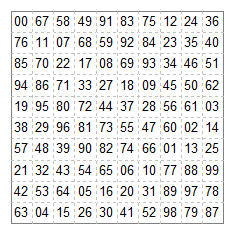 Working from this by permuting the ranks and files several times I have arrived at the following square: 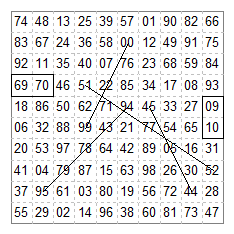 What is in effect the same double latin square can be presented in other forms by permutation of the left or right digits (since a latin square is just a pattern independent of the actual symbols used). But whether a better permutation can be chosen to make a Wizard tour more likely is not clear to me.

Posted by George Jelliss at 19:51 No comments: