Rationalism and Nostalgia in London

On Monday afternoon I took the train to London for the Rationalist Association AGM. This was held in the Library of the Bishopsgate Institute. There were only about twenty people there, including the three speakers, considerably less than last year's meeting at the Arts Guild. No doubt this was due in part to the heat. The main topic was the intention to concentrate efforts on electronic media rather than print, following current trends in the media. Opening an online forum was mentioned and I pointed put that there used to be one, but it was closed down. I hope it will be an open forum and not just for members, as a closed forum (as with the BHA members forum) can be rather dull, though of course it would require more moderators. I also complained about the lack of a question and answer session at the Aaronovitch meeting earlier in the year, arguing that such a session is essential to any rationalist meeting, otherwise it can seem patronising and authoritarian. A talk by Jonathan Miller, the RA President, to be given in the main hall at the BI, is planned for later in the year.

On the way to the meeting I walked from London Bridge station, taking a route deliberately past the base of 30 St Mary Ax, otherwise known as the "Gherkin", since I hadn't seen it from close up. It is all very neatly done, with the diamond-shaped panels right down to ground level. I had a coffee and Pret bar in the cafe opposite. Since I was early I also took a walk round Exchange Square on the other side of Bishopsgate. The architecture, both new and old, is impressive, but I can't say the same for the sculpture of a big woman reclining on one side of the square; I've no idea what if anything she is intended to represent. After the meeting I took a stroll to the east and ended up in Jewry Street by Sir John Cass College which I attended for a while some fifty years ago. This led down to the Tower of London, and I walked across Tower Bridge, and past the building that used to be St Olaves Grammar School, now being converted into a hotel. Then up Tooley Street to catch my train back to Hastings. The next day I felt quite tired, from the heat, and still do to an extent.

Posted by George Jelliss at 23:21 No comments: 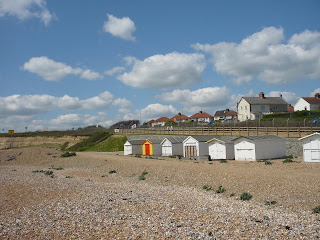 Last Saturday, 12 May, I took a walk along to Bexhill. This was prompted in part by the fact that Sustrans, the sustainable transport charity of which I am a supporter was holding a "family fun day" at Glyne Gap to celebrate the new cycle link between Hastings and Bexhill along the seafront, avoiding the main road. The photo shows the main part of the work where it rises up to the small hill just before it reaches Glyne Gap. In fact it was being used more by pedestrians than cyclists while I was there. The quality of the path is not as good as the previously existing path past the coastguard post to Bexhill, since it is not tarred, and is rough in many places, which is not good for cycle tyres. I was walking rather than using my bike, and the tide was out so that I took the opportunity to walk along the beach some distance away from the shore. In the process I took 12 other photos besides this one. As you can see it was a fine sunny day, though with a chill wind. The flags and stands of the Sustrans exhibition didn't much interest me, though I noticed Councillor Lock and the Hastings MP were involved. Instead I carried on to Bexhill and looked into the Bestsellers bookshop, which is run by one of our Hastings Humanists members (Mike Lynott). There we had a chat and I bought a couple of books (The Story of Philosophy by Bryan Magee, and The Fire by Katherine Neville, which is a sequel to her novel The Eight which I enjoyed some years ago.) By chance I met another Hastings Humanists member (Graham Martin-Royle) in the street and we stopped for a chat. After a meal at the Pop In Restaurant, and after buying a Guardian newspaper, I returned home by bus. Quite an eventful and pleasant day out.
Posted by George Jelliss at 22:41 No comments:

Went out to do some shopping in Kings Road this morning but felt distinctly doddery, probably from lack of exercise lately. So decided it would be better to go for a longer walk. Took the steps up to London Road and walked up to Silverhill to buy some coffee and biscuits in Asda. They no longer seem to stock Hovis Crackers, which is disappointing, as no other shops round here stock them as far as I'm aware. From there I took the scenic route, all the way through Alexandra Park into Hastings. The clock on the Town Hall registered 12:30 so I decided to go to the Royale Cafe for sustenance. They make a very nice steak pie with roast potatoes and three veg. This is more of a plateful than I normally eat when I'm at home. Completed the circuit with a walk along the promenade, and home in time to watch some more of the snooker on TV. Feel a lot better for the exercise, but must try to keep it up.
Posted by George Jelliss at 15:20 No comments: