It seems my alternative disphenocingulum (J90) has been discovered before.
It is number 25 on this page of "near miss" Johnson solids.

This claims that there is some distortion in the cingulum triangle.
Though in my models I could not detect any distortion. It must be very small.

The author appears to be Jim McNeill as named here:


Posted by George Jelliss at 21:36 No comments:

As a result of contacts on twitter I have become interested in polyhedra, in particular the "Johnson Solids" which are formed of regular polygons but are not the usual suspects.

In particular a drawing was posted of the "disphenocingulum".  As a result I decided to make a model in card and ended up with two different versions. The 12 orange triangles form the "cingulum". The "spheno" parts form the roof and keel: 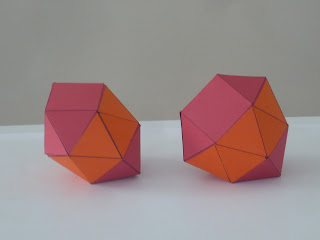 Corresponding flat diagrams of the pieces and their connections are:
Left 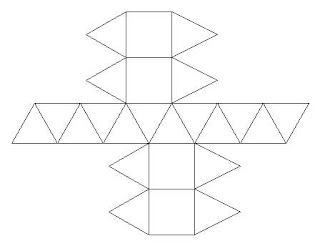 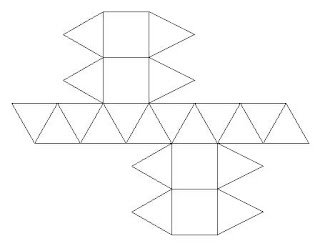 So is my new version an alternative ("isotope") of the disphenocingulum? Or is one of them not an authentic Johnson Solid because it has a pair of triangles that are coplanar? It is difficult to tell from the models if some pairs of triangles are at an angle to each other or are flat together. The angle may be very small. In fact the one on the right seems flatter to me than that on the left.

Posted by George Jelliss at 11:23 No comments: