This is about the largest board I can draw a tour on, and I've had to reduce the scale as compared with the previous tours. I'm not sure if I've reduced the links, shown in black, to a minimum. This board like the 6x6 and 18x18 allows 90 degree rotational symmetry. 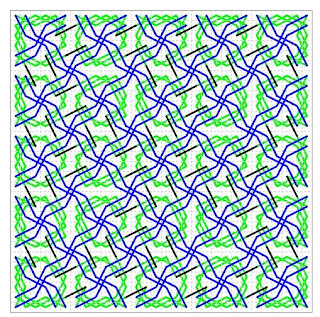 Posted by George Jelliss at 12:37 No comments:

This 12x12 knight tour with 180 degree rotational symmetry completes the set of ribbon tours constructed over the last few days, the others being on boards 18x18 and 24x24. I've also been showing them on Twitter. 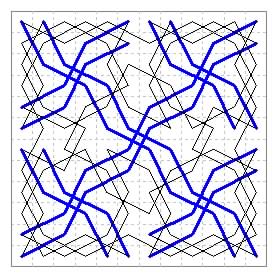 Also shown here is the well known 6x6 tour of similar design. This like the 18x18 tour has 90 degree rotational symmetry.

Posted by George Jelliss at 14:40 No comments:

This tour solves the same task as on the 18x18 case published previously, but proved much more difficult to achieve. Given the diagonal braids shown in blue, and putting in the natural connections in each 6x6 area, similar to the 6x6 tour with the same diagonal pattern, results in a pseudotour of twelve separate circuits (4 of 14 cells, 4 of 20, 4 of 60 and 2 of 100, giving the total 576 = 24x24). 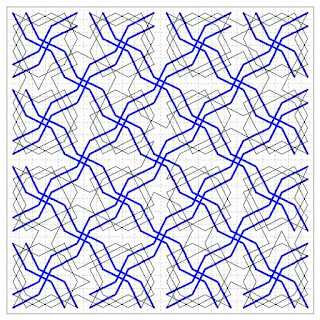 The task is then to put in the minimum number of links to join the circuits up into a single tour and to ensure that it is a symmetric tour, which on this size of board means 180 degree rotational symmetry (which I call rotary symmetry). This is tricky since some of the circuits are themselves symmetric.
Posted by George Jelliss at 10:36 No comments:

It is possible, as shown here, to put an extra set of obtuse diagonal braids between those used in my 18x18 tour, to cover any size area, but they cannot be incorporated in a tour since they leave isolated cells uncovered at intervals of {0,3} moves, as if the whole board is composed of centreless 3x3 boards. All other cells are used. 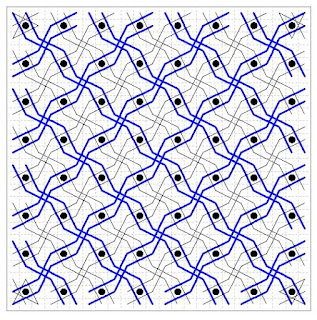 Posted by George Jelliss at 14:19 No comments:

This is a tour I constructed yesterday, partly inspired by some work by Robert Bosch on twitter, showing patterns on 24x24 boards. This is a closed tour on the 18x18 board which has 90 degree rotational symmetry (birotary symmetry as I call it). It features complete diagonal braids of oblique angle type. It is based on the familiar 6x6 tour of this type. 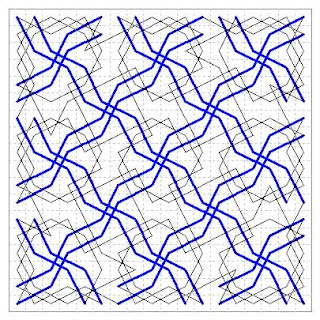 I have revised the page on "Simplified Spelling" on my website, and also the "Anthology of Well-Known Verse" which shows well known pieces in the new spelling scheme.

Some new spellings: 'church' becomes tyurtc, 'judge' becomes dyudj. The indefinite article 'a' stays as a or becomes ei according to pronunciation. Similarly the definite article 'the' becomes qa or qi. I have given up trying to distinguish between the u sounds in 'cut' and 'put', or using a special letter for the indefinite vowel sound. This means more current spellings are unchanged.

Posted by George Jelliss at 10:59 No comments:

I just managed to get round to updating my profile on this Blogger account, so that it now shows my current location, Crewe instead of St Leonards on Sea. It took a lot of trial and error before I could locate the page to make the updates. It also had my old email address, long out of date. I've left the same photo of myself as I was back in 2009 when I started this Diary.

Posted by George Jelliss at 11:00 No comments: