Here is an image of a tour formed from four copies of a circuit that does not cross itself. One move in each circuit is deleted and the loose ends joined up to convert the pseudotour into a tour, a process I call simple-linking. This is not a new result. 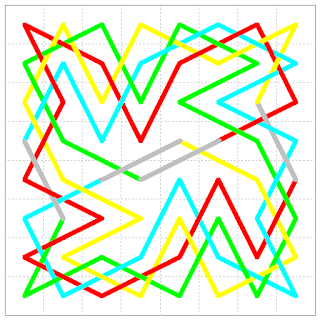 However the paths have been made to interlace, passing alternately over and under each other. This is the new aspect, and accomplishing this was the difficult part of the drawing. Other colour schemes might prove more attractive, but for this first attempt I have used primary colours, with the links in grey. Making a tour of this type was suggested in part by correspondence with Harold Cataquet.

Posted by George Jelliss at 19:18 No comments: