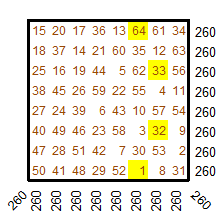 This magic Empress tour (or Magic Two-Knight Tour if you prefer) was apparently included in the collections of magic knight tours published by General Parmentier in the 1890s, but it is missing from the page of such tours on the KTN website. Whether this was in the H. J. R. Murray 1951 manuscript and I missed it out I'm not sure. There are subtle differences in the tours.

There is also another that I reported here in 2015:
http://jeepyjay.blogspot.co.uk/2015/08/magic-empress-tour.html
So I must get round to updating the page.

Note added 19 Jan 2017: I now realise that the above array from Jaime is the reverse numbering of tour O as listed on the Knight's Tour Notes web-page.