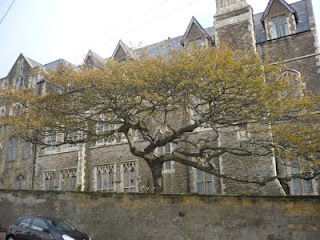 Someone, presumably in one of our flats here, has left an old door-frame in the front garden. It has been there several weeks. It will probably be up to me to arrange for it to be taken away. More recently someone has also left some bits of wood from carpentry work lying about, still with nails sticking out of them. I'd have thought any competent carpenter would know to remove the nails and dsipose of the waste safely. I find such carelessness annoying, especially when it's left to others, i.e. me, to tidy up.
Posted by George Jelliss at 10:49