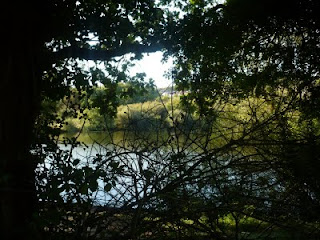 I've been reading the book The Age of Wonder by Richard Holmes about science at the end of the 18th century when Joseph Banks, William Herschel and Humphrey Davy were active, and also The Lunar Men by Jenny Uglow, about the group that included Erasmus Darwin, Joseph Priestley, James Watt and others. Both reproduce paintings by Joseph Wright. I saw these, by chance, when I was in Derby a year or so ago and happened to pass time by visiting the City Museum, which has a whole room devoted to his paintings. Holmes writes that "Wright became a dramatic painter of experimental and laboratory scenes ... The calm, glowing light of reason is surrounded by the intense, psychological chiaroscuro associated with Georges de la Tour." I'm not sure that I entirely go along with this interpretation, but Wright's treatment of light is certainly striking.
Posted by George Jelliss at 20:46