At the August Bank Holiday Rapid-Play at the Hastings Chess Club I somehow did well enough to win a £5 book voucher. I spent it on "Professor Stewart's Incredible Numbers". On page 46 there is an account of numbers that cannot be expressed as a sum of three squares. A-M. Legendre found the formula (4^k)(8n + 1) for all such numbers. Here is a figured tour that I just constructed this afternoon showing all the Legendre Numbers less than 65 on the diagonals. 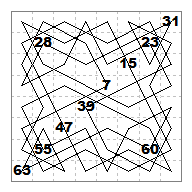 They consist of the eight odd numbers that are one less than a multiple of eight (that is 8n - 1) and the two even numbers 28 and 60. They occur in pairs that differ by 32 thus allowing a symmetric arrangement in a symmetric knight tour. The reader may like to try constructing a similar tour with the odd numbers in a different sequence or the even numbers on different cells.